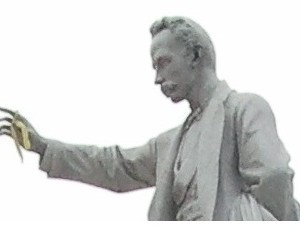 HAVANA TIMES — It’s been over a month since the beginning of the “yellow ribbon” campaign calling for the release of the 4 Cubans imprisoned in the United States and yellow – which is also the color of Cuba’s Virgin of Charity and the Yoruba deity Oshun – continues to tint the city with its complex polysemy of spiritual symbolism and its tacit call for conformity and political commitment.

Luckily, good old common sense – the everyday wisdom which isn’t radical, anti-establishment or even critical of anything, but which helps us get along and to minimize aggressiveness enormously – helped curb some of the more extreme expressions of this campaign.

Someone had come up with the idea of tying a yellow ribbon around the index finger of the Jose Marti statute in Havana’s Parque Central. I’m happy to see it’s been removed. The rather bombastic performance whereby the yellow symbol was attached to and then removed from the finger of Cuba’s independence hero left me with a strange, bitter feeling – and that’s sad.

The yellow flag which, as anyone versed in naval things or any reader of Gabriel Garcia Marquez’ Love in the Times of Cholera knows, signals an epidemic alert, no longer flutters over the El Morro colonial fortress across the bay.

It was replaced with a large yellow ribbon, tied to the phallic trunk of the lighthouse – a ribbon which is no longer there.

I hope the four Cubans will be able to return home soon. In the meantime, it seems that, as the saying goes, we Cubans either don’t do enough or do too much.

5 thoughts on “Cuba: Doing Too Little, Doing Too Much”