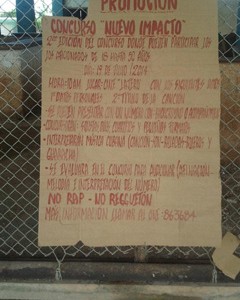 The organizers of the contest are evidently clear on what qualifies as “Cuban” music and what does not. “Ballads”, a genre dating back to medieval European poetry, invoking the genius of Polish composer Chopin and the popular music of nearly all Western countries of the twentieth century, is “Cuban.”

“Traditional songs,” which can be just about anything, are also “Cuban.”

Neither rap nor reggaeton are, however.

One of the ideas behind the contest is to exclude the “serially produced” music that abounds in Cuba’s music scene today, and this may be commendable.

Nothing, however, justifies the automatic exclusion of Cuba’s most popular music genres today. The pieces presented for the competition may indeed be terrible, but that’s what juries are for, aren’t they?

Also: rap and reggaeton are very far from being the same thing.

Rappers had to work very hard in the 90s to have their music considered “Cuban.” Now, we seem to be witnessing a regressive trend.

At the time, rap was divided into two camps: “commercial” and “underground.”

Afterwards, commercial rap practically disappeared from the scene, for those responsible for it joined the ranks of reggaeton musicians when the latter began to conquer the appeal of Cuba’s young.

Some “underground” rappers did the same thing.

The result of this is that most Cuban rap (or “hip-hop” as some prefer to call it) produced today is “underground.”

The organizers of the contest, it seems, prefer to throw the two into the same sack and to discredit both genres in one fell swoop.

Some Cuban authors, such as young researcher Rosilin Bayona, refer to both rap and reggaeton as the “music of resistance.”

From that perspective, we would qualify the attitude of the contest organizers as simply, official censorship.

For me, however, things are a little more complex. The semantics of reggaeton are not the same as those of rap. I believe rap is a genre that conveys ideas of change, while a good part of reggaeton music accepts and strengthens the status quo in Cuba and its asymmetrical (sexist, racist and classist) power relationships.

But that’s also open to discussion.

At any rate, placing things under the same category to later leave them out is a way of assimilating, colonizing and curtailing creative freedom.

The organizers of the competition seem to have appointed themselves the managers and classifiers of what is “Cuban.”

I wonder: can exclusion lead to anything “positive”?