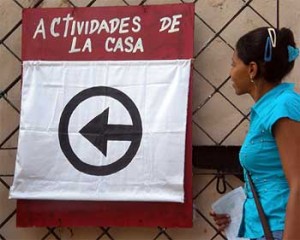 HAVANA TIMES — As we saw in the previous posts concerning my impressions (Part I and Part II), on the second day of the forum we made an attempt to establish dialogue between various cultural and spiritual traditions present in Cuba, as well as with the rest of the public.

I think that the people who spoke made an effort to show the contributions of each tradition — all with meanings and practices developed over centuries — that we sometimes long for today, especially when dreaming of and advancing toward the Cuba of the future.

Jorge Luis Aleman emphasized how important it is for freedom to discard all fetishisms, including economic ones, as he interpreted the Bible from the perspective of liberation theology.

Ramon Garcia explained how the grassroots Abakua fraternity was consolidated in urban locales of western Cuba, breaking racial barriers and creating a bastion of morality “from below.”

Mario Castillo identified a similar trend within horizontal libertarian self-organization in the activist labor movement, while Tato Quiñoes explained to us how the Yoruba-Osha-Ifa tradition — owing precisely to its absence of centralization — was a guarantee of survival and revival during the harsh years of slavery, institutional racism and the subsequent “scientific atheism” of the “Soviet era.”

Veronica Vega showed us how, in a tradition that comes from India, the ideal and practice of “ahimsa” (nonviolence) and the pursuit of unity through meditation offer a possible path to peaceful coexistence and which many contemporary societies have worked hard to achieve (and which, I would add, we are seeing more and more threatened in Cuba by new socio-economic and cultural trends).

Wolette Tsehay Gabriel Tafari, from the Rasta movement, showed how Cubans of this Caribbean religious expression defend their African “ancestralism” in a particular way. He also explained how they have even succeeded in creating parallel self-managed communities such as those that exist in the central region of the country.

According to Wolette, Cuban Rastafarians are experiencing difficult times since they are often discriminated against because of their presumed “criminality.”

I think this was all a good first attempt at achieving dialogue between traditions for the sake of social self-organization in Cuba. As the Chinese say: “Beginning is half the journey,” so I hope there will be other opportunities to follow up on all of this.

With or without ideology?

The debate again revealed the dilemma that we “discovered” the preceding day: how for many participants, ideologies are obsolete and therefore they should be replaced by concrete organizational practices, without claims of being based on “unifying world views.”  For others, these also affect the real possibilities for unity, though these (some of these) are advocated from spiritual traditions.

My opinion is that ideology, in any case, is a factor to be taken into account — and not only if someone proclaims themself to be a “Marxist,” “liberal,” “anarchist,” “feminist” or “Trotskyist.” This is because among the phenomena that are probably the most ideological in Cuba today are our ubiquitous reggaeton and the Carlos III Mall.

Ideology is often concealed, especially when it’s said that it’s not.

Hence the great need for criticism.

Following the debate, we turned to an artistic section led by the folk singers and rappers of the group “Kende con K,” from the Alamar neighborhood. It was a moment of communion with this new but still unknown music, which came to the forum to build bridges with those who were there.

Then there was lunch (with selections for vegetarians and even for fruitivors! – something rare in Cuba). Also, as was already described in Isbel’s post,  we were told by the community center staff to leave the facility and to go meet somewhere else.

I won’t detail here the vicissitudes of our having had to move the function to La Ceiba Park; instead, I’ll highlight the interesting exchanges of opinions that we had there concerning the need to change the legal framework in Cuba.

The constitution, the republic and cannabis

Political scientist Juan Valdes Paz, a representative of the heroic intellectual generation of the ‘60s, spoke to us about the problems of the present constitution, and that rather than reforming a “text with problems,” he believes it would good to put it into practice just as it is (including some of its provisions — difficult to apply today —- on the defense of citizens’ rights and on democratic principles of popular participation, organization and control of the activities of public institutions).

Returning to the discussion in the morning, we listened to Rastafarians who told us about some of their problems as a community.

They discussed how people fail to presume innocence when Rasta farmers are denied the use of land because state administrators presume that inevitably they’ll plant Cannabis on the plots.

The rights of association and free speech were other issues discussed, along with multiple forms of discrimination.

The question of capitalism or no capitalism couldn’t be missed in the debate.

Many people, I believe, make necessity a virtue and consider that today’s human beings cannot live in a system that isn’t capitalist.

I think, though, that if we assume the inflexibility of “natural” laws (be they “economic,” “scientific,” or “objective”), or the realities of the capitalist market, or if we give up on thinking about alternatives, nothing will prevent us from also assuming that racist or sexist discrimination is “natural,” or that the eternally inexorable existence of violence or the depredation of nature are also “natural.”

I don’t think the ahimsa of Gandhi really has much to do in the company of the state-capitalist Leviathan of Hobbes.

Unquestionably, the issue of rights and opportunities is seen as key to the future of Cuba. Frameworks that are more precise in the building of a more just country will be discussed in future gatherings of the Critical Observatory Network.