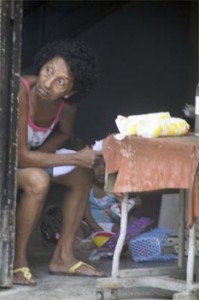 HAVANA TIMES — It seems that after my recent post about Radio Marti, I’m being accused of cowardice, being pro-Soviet and even secretly hating the West.

As for the West, perhaps I should mention that among my happiest years were those I spent in London studying Anthropology (basically, I was lucky…).

Still, I can’t say that when I was there I stopped understanding what was meant by the word c-a-p-i-t-a-l-i-s-m (like that, with all its letters: with its “formal rationality,” the instrumental reason of those in power; and those are the words of Max Weber, a German conservative, not those of some Stalinist Konstantinov).

But I saw freedoms and especially vibrant communities… I think those are the paths out of this crisis.

As for my being afraid (well, all of us are afraid), it would be an unprecedented act of arrogance to believe I’m free of it.

And as far as being pro-Soviet goes, I do have love for Russia, but on more than one occasion we’ve put up materials in public places here in Havana about what happened in Czechoslovakia in 1968.

My Russia is that of the rebels in Kronstadt (1921), that of Alexander Men (the priest who they killed for preaching the Christian faith as freedom and not the morality of the state), and the singer Vladimir Vysotski (the rebellious singer), but not the Russia of Brezhnev, the General Secretary of the Communist Party of the Soviet Union when I was born.

In short, they’re mimetically comparing Radio Marti to Granma or the officialist “Mesa Redonda” TV program, and comparing the host of that show, Randy Alonso, to the dissident blogger Yoani Sanchez. How easy this all is!

This doesn’t imply that all media sources should be like Radio Marti or Granma! I don’t think these comparisons are fitting. We know the state-run media system is not a path to freedom… but nor is the system in which the media is administered by groups of shareholders.

Now that we’re in the process of elections here, what came to my mind was what happened two and a half years ago, when I wrote a couple posts for Havana Times dealing with the current Cuban electoral system (“Independent Candidates Without Platforms”  and “Cuba’s Elections and the Filter”].

There later appeared an article by a certain Angel Sastre in the online version of a Spanish(?)  newspaper called La Razon (The Truth). The name makes it seem like it’s a clone of the now liberalist newspaper Pravda (which also means “the truth”).  In the online paper, Sastre literally wrote the following:

“‘I wonder: Why can’t we voters learn about how our future delegates plan to solve the problems of our neighborhoods? What do they think about the situation in the country and ways to improve it?’ This was a comment made to La Razon in a telephone interview with Dmitri Prieto-Samsonov, a Russian writer who has lived in Havana for 40 years.”

Needless to say, not only did I not give a telephone interview to La Razon (and not out of fear, but simply because they never called me), but my words were actually copied verbatim from Havana Times, without attribution. What’s more, I’m not a Russian writer, I don’t live in Havana, and I haven’t turned 40 yet.

What kind of respect for Cubans and for freedom of expression could this newspaper have if it manipulates what we say? It seems that this is what’s least important to it and the writer. Is this the “freedom” that La Razon wants for Cuba? Can one achieve freedom through lies?

I wrote a fairly angry email to the newspaper and then contacted some libertarian friends of mine so that they follow up on it on the Internet. They found that the article had apparently disappeared, but who knows if they’ll put it up again later. I’m not going to waste my limited online time trying to verify that.

I never received even the slightest apology from the owners of La Razon for the clearly deliberate “blunder” by this Sastre fellow.

So, we can see that not only do the state-run media combine truths with falsehoods.

Only a-u-t-o-g-e-s-t-i-o-n (like that, with all the letters, meaning self-organization from below) is what I think is the way to full freedom of expression, and for everyone.

5 thoughts on “‘Owners’ of the ‘Truth’ Produce Misery”