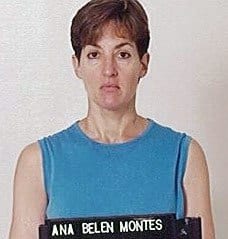 HAVANA TIMES — Some weeks ago, I wrote and Havana Times published an article titled Ana Belen Montes: A Case of Conscience. In one of the paragraphs dealing with this heroic woman, who has been imprisoned under the most trying conditions one can imagine, I promised to broaden on the subject in a future post.

Ana Belen Montes, former Pentagon intelligence analyst, convicted to 25 years in prison in 2002 for supplying Cuba with information about the United States’ aggressive policies towards the island, has been serving her sentence at the Carswell Federal Medical Center, located in Fort Worth, Texas – a prison offering specialized mental health services (the wing Ana is confined in) to female criminals, in a top-security environment.

According to a report published in 2015, for more than ten years, Ana Belen Montes has endured the following confinement conditions, in frank violation of her human rights:

“The US press has reported that “serving a sentence in the Carswell treatment unit has become a death sentence for many female prisoners.” Detainees there have suffered gross violations of their human and constitutional rights, including documented cases of police abuse, suspicious deaths — investigations into which have been blatantly obstructed, deaths due to the denial of basic medical attention, rape of prisoners by guards and exposure to toxic substances, all of which place her life at risk.”

“Ana Belen Montes was not paid by Cuba for what she did and there was nothing sordid or coercive about her recruitment. She was not motivated by any desire for revenge or attraction to
power.  Despite full awareness of the personal risk arising, she acted out of love, her sense of justice and a noble solidarity with Cuba. She was accused of having helped convince both George W. Bush and Bill Clinton that Cuba did not represent a military threat to the U.S., thus preventing a war that would have resulted in a significant loss of Cuban and US lives.”

Recently, I was provided with information that indicates Ana Belen Montes’ confinement conditions have changed:

According to this information, provided by the Cuban Committee for the Freedom of Ana Belen Montes, prison conditions are not as extreme as they were for over ten years, when she was being punished more severely for having prevented a direct act of aggression against Cuba through her intelligence efforts. By virtue of the changes that have been taking place between the two countries and understanding this as an attenuating circumstance, Ana Belen Montes should be pardoned.