HAVANA TIMES – On April 10, hundreds of protesters gathered in a car caravan at the Eloy, Arizona migrant detention center to demand immediate freedom for all migrants and refugees. Protesters stayed in their cars and drove back and forth on the two-lane road, while honking and cheering and banging on drums, making enough noise for the prisoners inside to hear them. Huge signs on the cars announced Detention is Deadly and Free Them All.

The La Palma Correctional Center in Eloy is run by a private prison company for the U.S. Immigration and Customs Enforcement (ICE). 1,800 migrants are currently being held there. Only a handful have been released so far.

Three days later, a second case of COVID-19 was confirmed at La Palma, bringing the total to five among detained migrants in Arizona. (These numbers will be higher by the time this is published.) All prisoners, including detainees, are especially vulnerable to the spread of contagious disease due to overcrowded conditions, lack of sanitary facilities, inadequate medical care, and constant close contact with guards and staff members rotating through the facilities.

Throughout the US, more than 600 employees of the Department of Homeland Security, which includes ICE, have tested positive for COVID-19 so far.

On March 21, the director of the US Centers for Disease Control and Prevention announced the closing of the US – Mexico border to anyone without citizenship or permanent residency, based on a 1944 law that permits closure to prevent the spread of communicable disease.

Since then, more than 10,000 people have been expelled to Mexico and other countries, including asylum seekers and children traveling alone. Almost none of them are given hearings or the opportunity to request asylum, they are simply shoved back through the nearest port of entry.

In Douglas, Arizona, a trailer is now parked right by the border wall to facilitate rapid processing, occupying the space where we perform our annual Concert without Borders.

Recently, the number of migrants arriving at the southern border has dropped to the lowest numbers in decades. Noncommercial traffic is down 70% since last year. The danger of contagion is greater in the US, with some 683,000 confirmed cases, while Mexico, El Salvador, Guatemala, and Honduras combined have around 7,100 cases thus far.

Today the migrant shelter Centro de Atención a Migrante Exodus (CAME) where I have volunteered in Agua Prieta, Sonora holds thirty-three migrants, sixteen of them children, all from Guerrero, Mexico. They have been there for weeks, they were initially waiting to claim asylum in the US, but now that the US government has announced it is not accepting any more asylum claims, they are simply waiting. 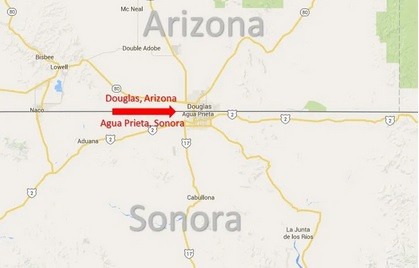 They are all in good health and the shelter protects them by not accepting any new guests. CAME has space for forty-four beds and a scheduled expansion would have doubled its size. Now fear of contagion has closed its doors to everyone except those there when the quarantine began.

Most of the migrants who came to CAME in 2019 were from Mexico, then Cuba, Russia, the Central American northern triangle (El Salvador, Guatemala, Honduras), and Venezuela.

Earlier this year, I spoke with several Cubans, young, single adults, compelled to abandon promising careers and flee after they expressed disagreements with the government. They all mentioned their refusal to take part in the constitutional referendum of February, 2019.

First, they were sidelined at work, and then, if they did not give in, the repression got worse: agents came to their homes and workplaces, where they fired from their jobs, and their families were menaced. They were arrested or simply detained without formal procedures. They said they were beaten and threatened with further harm.

One refugee was a travel agent, who left the country by flying to Managua, Nicaragua, and then to Mexico City, then overland, reaching Agua Prieta two months later. Two were hair stylists, one from Havana and another from a provincial town. Others were students of engineering, computer sciences, and tourism. They all said they were persecuted for their political beliefs and came to the US believing it would offer shelter. All of them were allowed to file asylum petitions, but we don’t know where they are now.

All of the migrants who passed through CAME were eventually allowed into the US to apply for political asylum. CAME has no way of tracking these individuals after they pass through the turnstile. Some wrote to say they were safe with family members in the US, others were placed in detention centers. Some Central American migrants were flown to Guatemala, which the US government considers a “safe third country.” Many Mexican migrants were sent to Juárez, on the U.S.–Mexican border, to wait for their hearings. Others returned home.

According to the Migration Policy Institute, 84,000 petitions for political asylum were filed in 2019 and 30,000 were granted. Only two percent of those 30,000 were from Latin America (mostly El Salvador and Colombia), the rest were from Asia, Africa, and the Middle East. The ceiling for 2020 will only be 18,000, which is the lowest number since the Refugee Act of 1980.

This refugee admissions ceiling is fixed each year by the president and members of congress. There are now as many as a third of a million asylum cases waiting to be adjudicated in the US (For more information, see https://www.migrationpolicy.org/.)