On the Mexico/U.S. Border: Doing Volunteer Work at the Migrant Resource Center in Agua Prieta, Sonora. 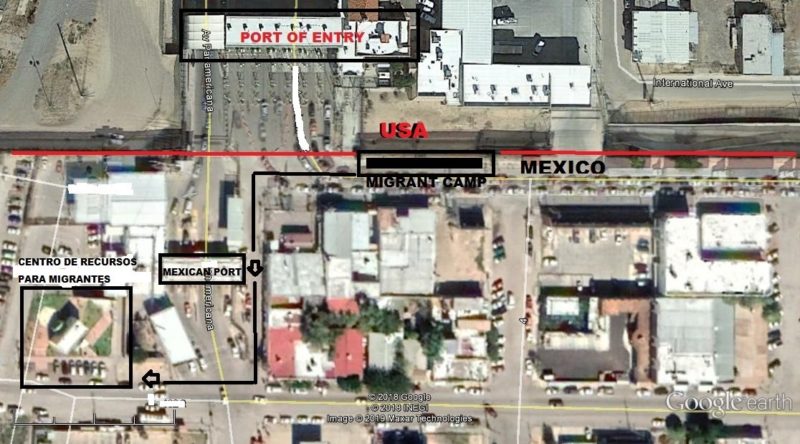 HAVANA TIMES – “Watch the rooftops and get to know the lookouts for the cartel,” said John. That was part of the training session for volunteers at the Migrant Resource Center in Agua Prieta, Sonora, Mexico. Our job is to accompany asylum-seeking migrants from their places at the head of the line for requesting asylum from the U.S. to our building, several blocks away, for a few hours of relaxation, and then back. We walk the migrants in lines of eight or ten, one of us at the front and the other at the back, wearing big pink vests that say, Apoyo de migrantes (Support for Migrants).

The migrants are waiting in a camp made of PVC piping, covered with blankets and tarps tied to the border wall, which John helped to construct. Inside there are pallets and a couple of foam mattress pads for each person, and no room for anything else and barely room for their feet. Migrants who have come this far have their few possessions whittled down to a single bag. Until a few weeks ago, the migrants had an improvised bucket toilet with wood shavings that they carried once a day to the Center. The city quite rightly put an end to that practice and threatened to fine the MRC if we continued. Up to twenty people live in the camp for up to two weeks. They are next in line for admission to the U.S. and have been staying at the C.A.M.E. (Centro de Atención a Migrantes Exodus, Center for Attending to Migrants Exodus) family shelter at the Sacred Family Church a mile away. Most families stay at the CAME shelter for about a month before coming to the camp.

“Only people on drugs, mental defectives, and psychopaths don’t feel fear. Fear is good, pay attention to fear,” said John. We accompany the migrants to ward off violence and to bear witness if we must. John speaks about three kinds of violence: first, cartel violence erupting nearby that can catch us in the crossfires. Second, violence directed at the migrants. Third, violence against ourselves as volunteers. I think to myself, there are two more kinds: structural, meaning the larger geopolitical and economic forces that make billions of people’s lives unlivable, and linguistic: language that degrades, such as the word “illegal” applied to persons.

I am attending the monthly volunteers’ meeting with some fifteen people, most of us women, from Mexico and the U.S. John, first among volunteers, with eight years experience on the border, is doing the training. He tells us our jobs is to observe. First, we must observe our surroundings: the short walk to the Center includes a block with mostly empty storefronts on one side and on the other, a tall fence separating us from the Mexican border facilities. It would be ideal  for an ambush, since each end of the street could be easily blocked off.

Second, to observe the people around us. The cartels have lookouts, who are called halcones, or hawks. Who are they? They are watching us and are watching the migrants, from the bus stop across the street, among the vendors, by the taxi stand, on the rooftops. “Check the rooftops.” I chose a cap that would shade my eyes but not obstruct my vision, and I do look around, but this injunction gets to me. I never remember faces, will I be able to note new ones?

Third, to observe ourselves. If we think we’re in danger, if the hairs stand up at the back of our necks, trust that feeling and beware.

“Above all, be calm. Being calm in the face of aggression can defuse it. The cartels are real, they are here, they have periodic shootouts to balance accounts, the most recent a few months ago. Our job is to keep people safe, by being a visible presence, a potential witness, a living example of nonviolence.” For me, what is important is to send a message to Homeland Security and everyone who supports them or calls the refugees criminals, that these migrants are worth defending and their lives have value.

Emelina Rosa has 10 posts and counting. See all posts by Emelina Rosa