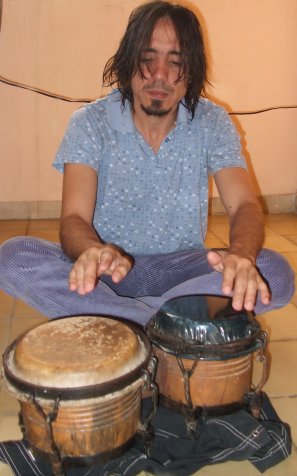 We’re living in interesting moments these days here in Havana.  You can feel a kind of volatility characteristic of times of change, although it’s subtle and probably wouldn’t be noticed by an unobservant foreign visitor.

People walk around like they’re expecting something to happen, as if they need only give a good stomp on the ground for some prophet of doom to appear, or old political figures to fall into disfavor, or for the “Ladies in White” to become active like never before (and with them the “Rapid Response” squads).  On any corner it seems you can run into one kind or another.

A political prisoner died recently during a hunger strike, a pretty uncommon event here; though food and basic goods are scarce, the State maintains at least the minimal level of services.

They also speak a lot on the radio and television about a world media campaign against “Cuba” (that’s how they refer to it), while here on the island the State seems to be taking it out on us.  To make matters worse, there was a minor earthquake on the east of the island.  It’s not much but makes the difference.

In the middle of these large storm clouds gathering, with the temperature rising, I asked myself: What am I supposed to do?

I hope no one is going to quickly label me as having become alienated.  I too worry about what’s happening and I’m trying to come to terms with it with the greatest conscientiousness possible, but this instrument was an excellent opportunity – so I took advantage of it.  After all, didn’t everything in the Haitian Revolution begin with the riotous beating of drums?

Through income that had nothing to do my official job —which never would have allowed me to think about buying the instrument— I was able to accumulate some CUCs.  In turn, a succession of coincidences worked out so that I could buy the bongos for only 15 CUC (19 USD).

It’s old, faded, and rusty; plus it has termites, cracked wood and beat-up leather; but in the stores they cost nearly 70 CUCs [almost $90 USD].  If I had to wait until I was able to save that amount from the wages from my job, the coming revolution would remain a utopia.

I still haven’t found anyone to give me bongo lessons, but I’m already studying African and traditional Cuban culture.  This is a marvelous universe to discover (for myself I mean) and I feel impassioned and blessed to be submerging myself in it.

So that’s what I have to recount today, while I beat out a few rhythms with my new friend, the bongo.

2 thoughts on “A Wanna Be a Bongo Player”