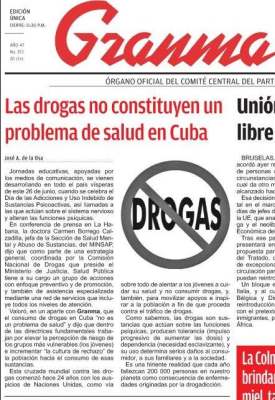 Today I’m going to refer to an article concerning drugs that came out a couple weeks ago (June 25) in the Granma newspaper, the “official organ of the Cuban Communist Party.”

In it they said, “Drugs are substances that result in an increasing tolerance (along with the progressive impulse to increase the dose) and dependence (an enslaving need). In addition, their use causes serious harm to the consumer, asserted the daily.

It’s well known that not all psychoactive compounds cause such effects(1). So why then does Granma generalize so crudely? Why is it lying like this to its readers? There must be some powerful reason.

Drugs have accompanied human beings for millennia. Only for the access that they facilitate to the divine should we have them at our altars – eatable altars by the way.

In reality they can be very dangerous to people’s health, and behind this is the reason that paternalistic governments (ones like ours) prohibit them and seek to protect us from them.

But is the reason (good health) why so much emphasis is put on drug prevention? I have the impression it isn’t. If that were the case, they wouldn’t allocate so much productive land here in Cuba to tobacco, nor would there be so much advertising for that and for alcohol, which are the most harmful and lethal drugs around today.

So, if protecting our health is not what motivates such misleading press, then what’s behind it? Why is there so much mistrust?

There are those who adduce economic reasons: prohibition keeps the prices high and therefore benefits coming into states involved in drug trafficking. At least in Cuba that option is discarded: our state might have many defects, but as far as I know it’s not a narco government.

I believe the gist of the matter revolves around the capacity of such substances to alter one’s consciousness, and in this way too they can serve to change the social order and the structures of power. I’ve noticed an innate fear of drugs among people who are little accepting of change, among conservatives.

OK, we’re all conservatives to some degree, but some more than others. Conservatism per se though is more intense in those people who have more to lose: the powerful, heads at the level of the family, the community or the country.

They are all bosses in the final analysis, enjoying privileged access to the media, using their influence to defend the status quo, contaminating culture with their own visceral fears and encouraging the consumption of those drugs that are the most alienating (as in the case of alcohol), since those who are alienated are usually the most docile.

But not all drugs are like alcohol. Some awaken consciousness instead of making people sleepy, or they simply alter it. It’s curious that the same substance that facilitates access to what never changes — the being — is in turn an explosive motivator of change.

Perhaps that’s why Granma(2), which is not religious (in the good sense of the word) and much less revolutionary, puts so much emphasis on demonizing them.

1 Entheogens, for example, cause neither dependence nor increased tolerance. Notwithstanding, these relatively innocuous drugs are given the same media treatment as the most toxic and harmful ones. Curiously, these have the most power to contribute to constructive and reparative alterations in our mental processes if consumed moderately, because even drinking too much water can be harmful to people’s heath.

2 When I say Granma, I’m referring of course to the entire mechanism cached away behind it.

One thought on “Drugs Are a Political Problem”