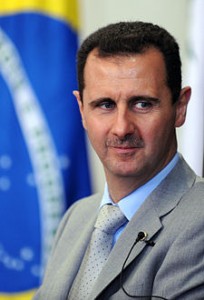 HAVANA TIMES — I have to admit that up until today I wasn’t clear whether keeping Cubans misinformed regarding certain topics was a deliberate act or an organic consequence of how the system is structured.

The treatment that “our” media has given the conflict in Syria has cleared up my doubts.

More than a year ago, a civil war began in which more than 10,000 people have died in this Middle East nation. The rebels combating the government of Bashar Al-Assad are hardly little angels with turbans, but nor are the Syrian army’s regular troops or the militia backing the president.

According to the UN, both sides have committed crimes against humanity (murders, torture, arbitrary arrests, sexual violence, indiscriminate attack, plundering and the destruction of the property).

However, from the very first instant, and day after day, the national “information” media here has limited itself to reproducing and accepting as truth the cables coming from SANA, the official Syrian news agency.

SANA presents the conflict as being between the good guys (patriotic, pro-government forces) and the bad guys (“mercenaries and murderers”).

Every day up-to-the-minute news and analysis circulates from around the world concerning this war, coming from the most diverse points of view. Nevertheless the guardians of the sacred grail work fervently here to prevent Cubans from drinking from those other glasses.

Regardless as to whether the news comes from the international corporate media or the blog of some left analyst, if the story doesn’t confirm that the rebels are fighting in the service of foreign nations, such news doesn’t make it through the filter.

A few months ago Noam Chomsky used the word “dictator” to describe Al Assad and considered the insurrection to be legitimate. When Chomsky takes a shot at capitalism, they immediately report his words here, however they apply the law of silence when that very same Chomsky doesn’t agree with the official version.

The advisers and those responsible for the Cuban media are well trained people who know their professions and their responsibilities; they are not farmers who fought in the mountains.

Of course they have access to the different media sources, and therefore they understand that the situation can’t be like SANA is painting it. What’s more, they know that in no circumstance — especially in a war — can one give blind credit to one of the sides involved in a conflict.

Nevertheless, instead of sharing their reflections they take advantage of us being surrounded by water to blatantly and deliberately lie to us.

I no longer have the slightest doubt about this.

It all has something to do with those aims, but I find those insufficient.

Other times they have been more subtle, or they have simply kept silent when their “friends” screwed up. Are they preparing people mentally for a future overseas war?

This is unlikely at the moment, but one shouldn’t lower their guard. Didn’t they base themselves on lies and similar simplifications when they convinced us of the need and justice of participating in the wars in Africa?
—–

1. Amnesty International and Human Right Watch have also accused the Syrian government of crimes against humanity.

2. When I speak about those responsible for the Cuban media, I’m referring to intermediary intellectuals and their superiors.

26 thoughts on “Keeping Your Guard Up”