HAVANA TIMES — On Monday, August 24, the world’s main stock markets suffered their worst trading in years. What I would like to focus on, however, is the collapse of my own “company” a mere week later. 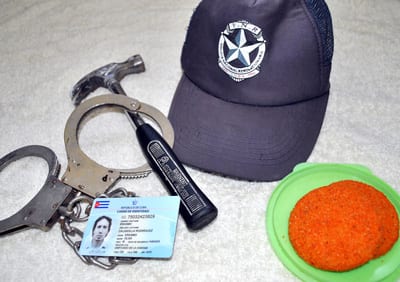 In the past few months (and especially during the ultra-hot summer season), I’ve been transporting ham and cheese sandwiches around the city. Almost every day, I take one or two hundred sandwiches from the place where they make them to the sales points, carrying them on my bicycle and sometimes by bus.

With this “killer” and tax-free business, I would be back home by noon with one or two dollars in my pocket, ready to get some rest, enjoy life, read, write and help out with the house chores, which always abound.

They stopped me near Prado and Neptuno, in Old Havana. When I saw the patrol car swerve and cut me off I thought they were after a drug dealer. Imagine my surprise when I saw them head towards me, the sandwich dealer.

The police officer asked to see the documents authorizing me to make these deliveries and, as I didn’t have any such documents, took me for a ride in the patrol car. On the way to the station, they checked up on me via the radio and were informed I was on record for disturbing the peace.

Last year, a drunkard attacked me for no reason. I’m a peaceful man (perhaps a little too peaceful for this world), but I had no choice but to defend myself. The police then showed up and made no distinction: they put us both in a cell and added a stain to my record.

The day I decide to launch my career as a dissident, Cuba’s political police could affirm, on the basis of official documents, that “this individual is nothing other than a common, violent and tax-evading criminal.” But let’s not get sidetracked.

Of all the jail cells in the city, the deluxe suite must be the one located at the station on Cuba and Chacon streets. I don’t think there’s any other cell with as many windows and as much fresh air as the one I was put in on my bad Monday. There were two guys sleeping on the benches and a third man emptying his bowels in an open latrine. He couldn’t stop shaking. His nerves must have gotten the better of his intestines.

One enters a jail cell expecting to find an aggressive environment and ends up feeling sympathy and compassion. At first, I was also very nervous but I decided to breathe deeply and calmly and I managed to relax completely. I thought of my family. They were probably worried I wasn’t back yet.

They let me out about an hour later. Two female inspectors, telling me they felt sorry for me, informed me I had violated Decree Law 315 and that I had to pay a fine of 1,500 Cuban pesos (some seventy-five dollars).

That’s more or less what I’ve earned this summer, getting up in the early morning, pedaling my bike under a scorching sun that’s damaged my skin and filling my lungs with diesel smoke.

The net result of all my work this summer is an empty wallet, smoked lungs, stains on my skin and another stain on my now long police record.

I think it’s great to have strict laws and law and order officials who enforce them, but, in the case of errand people, I think they’re turning the screws a little too much. Many self-employed business owners informally hire people to run errands for them, take out the trash or look after their properties at night. A whole bunch of low income people make a living this way. The police and inspectors go after errand people viciously but re-sellers roam freely. Everyone knows where they are, where they can be found in large numbers…everyone except the police, it seems.

Why don’t I take out a license or get a normal job? I would love to have a stable and socially useful job that will give me the minimum to live comfortably. I will answer these questions in a future post so as not to make this one too long.

7 thoughts on “My Own Crash on Monday”