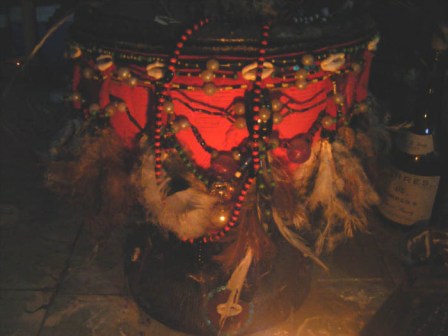 Up the dark and narrow stairway, Irina and I made our way to the little apartment constructed on the roof where people were celebrating the “Cajon”*.

We had been invited by a spiritualist friend, a key and very well paid figure in such ceremonies.  We went trustful in what he would present to us, but we got there early, without knowing anyone else.  We explained to the hostess, who kindly let us on in.

We sat down in a corner off to the side, timidly and without saying anything, while the other few people there conversed all around us.  “What the hell are we doing here?”  A musician with yellowish-red eyes said something to me, and the feeling was a communicational abyss.

The atmosphere didn’t seem very organic to us; it seemed more forced…perhaps the product of the conflict between religious believers, the cult of the ancestors and the deities, while on the other hand there was all the money, with its typical dynamics, acting as the primary motor (but not the only one) of the festivities.

The aim of the dance was to bring delight to a deceased grandmother who had loved the playing of congas and bembé drums.  The purpose was also to clear the way in life for her granddaughter, the hostess, a recently fired inspector who had appealed to the saints to get her job back; in exchange she had to give this Cajon.

It was a shock when the instruments broke the silence in the tiny warm room full of people.  Everything shook, generating a strange tension in everyone’s ears.  The music — violent and rhythmic — obliged each of us to participate.  It resembled nothing like what’s perceived from the seats of a theater; each boom-da-da-boom was breaking the barriers of the ego. 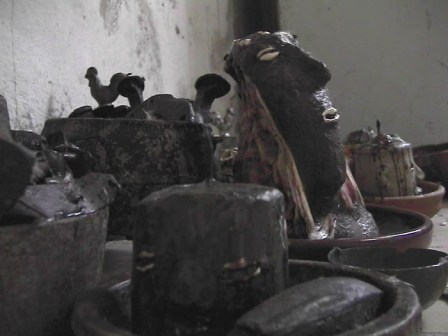 People began dancing, the dead descending, the possessed (authentic or contrived, amateurs or professionals) writhing and speaking in a strange dialect, like that of an African slave who hadn’t learned Spanish well. We both sat there paralyzed with our nerves on end.

Without knowing why, I began to cry.  I lit up a cigar that had been handed to me but I only felt worse.  To top it all off, an old half-drunk guy started yelling at me insistently for standing in the middle of the doorway (my refuge); something very dangerous apparently.

The solution was to move.  I came out from my corner doorway and began dancing (if you could call it that).  I was becoming more uninhibited, relaxing, getting into it all, and enjoying myself, but Irina felt bad: she had a headache, she was afraid, she was sneezing from the smoke, and suffering heart throbs and perspiration.  She was afraid they’d force her to the center of the room (something that’s done with women).  In short, she wanted to leave.

So we thanked them, we said goodbye and we went down the dark and narrow stairway that led us to the well-lit avenue that brought us back to this century.  But by the way, what century?

(*) I don’t know much about this, but I believe that the “Cajon” is an Afro-Cuban religious ceremony where the lead instrument is a simple wooden cajon (box), though the songs are also very important.