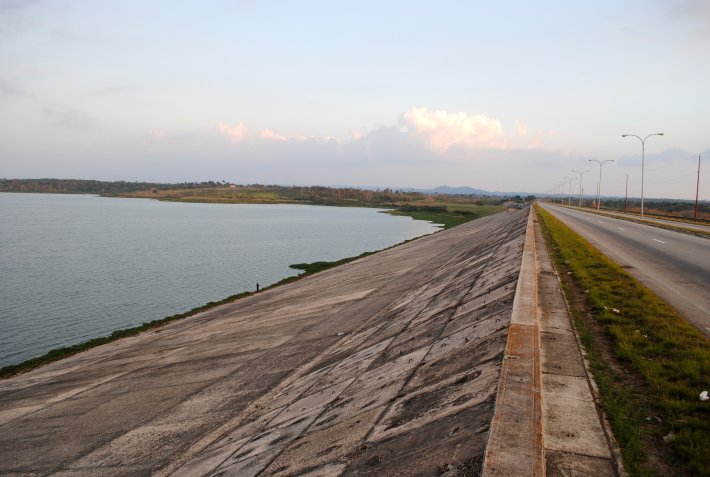 Ever since I can remember, the Liberation Army Reservoir has been a part of my life, though it’s a shame it has such a weird name.   The largest reservoir in the city, it was built a few years before I was born near in a place near my community (which has an even weirder name).

When I was little, my grandfather and my father used to take me there to fish and to walk along its banks.  It was an exciting experience, but also dangerous since there were so many shafts to old wells that had served the homes in the Chorrera neighborhood.  That entire community was submerged to build the reservoir, and it residents were moved to I don’t know where.  The remnants of that flooded village were plentiful back then.

The reservoir was so dangerous that every once in a while someone would come up missing.  Nowadays that doesn’t happen so much, but from time to time a dead person will appear in its waters, but not from having drown there. 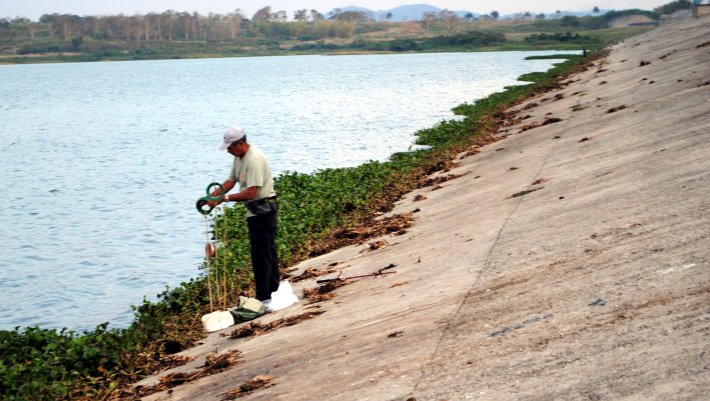 Also when I was still just a kid, the reservoir flooded its banks and broke through several dikes during Hurricane Frederic.  People were worried because the water got closer and closer to their houses, but in the end nothing happened; it was contained in time.

There once came some strange African fish into our reservoir from others upstream, but after that sighting I never saw any more of the strange creatures again.  What’s invading the Liberation Army Reservoir these days is an army of claria (Clarias gariepinus) another type of aggressive fish irresponsibly introduced by I don’t know who – though I’d love to find out.

Later, when my friends and I were older, eager for adventure and equipped with knives and diving masks, we set out to swim across the reservoir to the other bank.  Night had fallen, and terrified by the darkness and under a torrential cloudburst, we found ourselves, in a thicket of bramble that hid a mysterious military unit.

The uniformed soldiers interrogated us for a while and took us back home.  Ivan (that was the name of my buddy) and I continued to be defiant but in different ways; he rode a motorcycle and later lost his life doing stunts.

During the Special Period crisis, or a little before, some government-owned enterprise planted hundreds of small seedlings of the same species of carob tree, which was also non-native.  The purpose was to help preserve the green space around the reservoir.  As they grew they formed a nice wooded area for me to take refuge during those times when I was feeling a little blue or when I needed to reflect.

One of those days when I was walking along distracted I happened to knock over a stone and under it I found a veritable treasure; it consisted of several bars of laundry and bathroom soap.  As we were in the middle of the Special Period crisis and there were many such shortages, for a short time this made me a hero to my family.  The poor soul who had hid their treasure there would go through a rough spell, but at the time I didn’t think about that.

When I was older, the reservoir and its grove served as the meeting place for me and my gang.  Frequently we went camping or on dates, or if we were able to attract someone interesting to the neighborhood, it was a must to take them there to talk in the shade of a carob tree or to climb one. 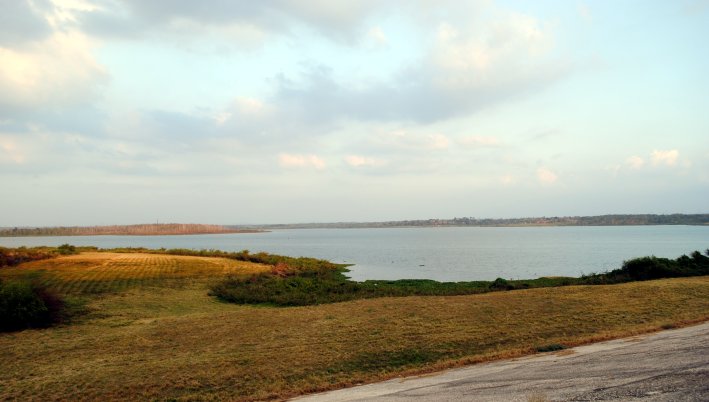 These were times in which hallucinating trips attracted a good part of our attention.  Around the reservoir we found what was necessary for our voyages, so we never had to seek out any dealer.

We collected and consumed mushrooms there, and in that very same spot we could take in the beauty and tranquility of the place, which lent itself to just that.  There are a number of people who were initiated to that experience on the reservoir bank.

Today, not only do I take advantage of the reservoir, but I also take care of it and help it.  Lots of crap enters it, as well as heavy metals.  The scrubland that surrounds is being cut back but no one tries to replace it.  People fish around there every night for “heavy” fish (more for metal than for meat), but they aren’t worried about the reservoir’s state of health either.

To make matters worse, the water level is dramatically dropping due to the drought.  The huge wall that’s supposed to hold its waters today seems more like an abandoned mausoleum.

Despite the disasters, many species of plants and animals continue to live there.  What stand out are the ducks and a band of pelicans that have come close to being decimated by humans and the pollution.

Several friends and I are now planting trees along the river, but we can do little without some institutional support (and it’s not that we haven’t tried to solicit it). However the little kids in the neighborhood accompany us enthusiastically.  At least we’re doing something.

Since it now seems like I’m as much a prisoner in my town as our dear reservoir is in its basin, I can already imagine myself visiting it in my old age, assuming we all make it that long.  And when I die, I hope I’ll have arranged for someone to bury me in an unmarked grave in the woods that surround it.  The trees would eventually consume me, but that’s not the only reason I’d like to be laid to rest there; the fact is that anywhere is better than being buried in Havana’s Colon cemetery, like a dead mass.