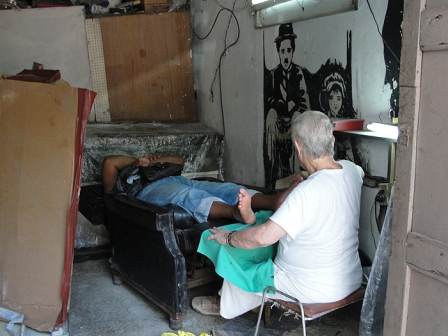 I had the chance to see several episodes of the program “Britain’s Got Talent,” where people with (or without) talent come on to compete for a cash award of £100,000 that promises to change their lives forever.

On one of the shows I saw three older women whose talent consisted of making fabrics with their hands.  The judges on the program, backed by the audience in a packed theater, didn’t allow these elderly women to finish their performance.  The preemptory buzzers of rejection sounded along with the audience’s booing, and there immediately began the expected humiliation of those ladies by the distinguished panel of judges.

I couldn’t continue watching the program.  Prior to the elderly women, other people had been degraded, but in the case of these women I couldn’t take their being shamed and I turned off the TV.

Frequently I think and say that I wouldn’t be able to stand living to an age where I don’t have the capacity to take care of myself.  Everything that has to do with old age creates a sense of worry in me, which has led me to the conclusion that I fear the process of aging.  But I repeat: I fear aging only to the extent that I have to depend on others to exist.

It’s similar to the case of my neighbor.  His sister, the woman who takes care of him, is also elderly but she’s completely independent, meaning she has the capacity to take care of herself on her own.  This white-haired woman stirred a mixed feeling of fondness and pity in me when I met her, just like with all elderly people I meet.

The fact of her having taken care of her brother, who was physically wrecked by cancer, and her being almost forgotten by her children, in addition to her having to attend to all the things demanded by a home (cleaning, buying food, cooking…), all of this made that feeling increase.  My sentiments grew almost to the point of admiration…at least until I heard the first scandal.

Her brother, who could barely stand up or mutter a few words, was being forcefully repressed by this “guard” for having produced some kind of disaster in the bathroom.  This was around ten at night.

Thanks to that incident I was able to learn that the supposedly self-sacrificing sister had accepted to take care of her brother not out of some family love, but for the award of the house they were living in and a monthly allowance paid to her by his children.

From the front room of my house I could feel the humiliation that my neighbor must have also been feeling, that of helplessness…unable to defend oneself.

The degrees of humiliation vary.  They range from the psychological to the physical level.  I thought back to another older gentleman who, with great difficultly, was getting off the P-1 bus at the Coppelia Park stop when the driver shut the door on him though half of his body was still inside.

The old man protested, but the driver only lashed back with a string of insults.  The response of people in the bus to such a tirade of insults was immediate; they loudly complained of the misdeed of the driver, who in payment peacefully got off the bus and went to have a cup of coffee.

This is how it is.  Senior citizens are discarded and left on the street begging for handouts, or they’re precariously attended to in old-folks homes while waiting for a visit from some relative, if they still have or remember them; or they’re mistreated in their own homes.

Generally, you reap what you sow, and the harvest of good family relations should result in golden years of happiness.  But it seems the devil is in the mix.  Although our country has a Social Security system, it doesn’t seem to be working for all seniors.

I suffer for them and I fear for myself.  And though the issue doesn’t weigh on me all my waking hours, I don’t cease to shiver every time I witness scenes like those I’ve just shared, which unfortunately are increasing daily.

Francisco Castro:Everything becomes simpler when one crosses the line of thirty. That does not make it easier, but rather the opposite. There I am on the other side of the line, trying to figure out, what little I know about art, politics, economy ... life, how to move without breaking oaths that seemed essential, how not to give up, how to make the years spent into a beacon to the future.

One thought on “Suffering for Them, Fearing for Me”