HAVANA TIMES — US citizens call it the Bay of Pigs, Cubans call it Playa Girón. Whatever you prefer, this crystal clear Caribbean bay surrounded by mosquito ridden wetland offers up the best of rural Cuban seaside life.

The bay penetrates Southern Matanzas province like an intrusive finger of blue water poking into the boggy Zapata swamp. Like many visitors I was drawn primarily by the area’s history, snorkeling, and proximity to Havana.

While traveling the east side of the bay by bicycle I also found some other reasons to visit, such as cuisine prepared from endangered species, a Revolutionary crocodile farm designed by Fidel Castro, and easy-going picturesque bike riding.

The trip started from Havana on a Viazul bus. I learned that aside from typical Cuban bad customer service the cafeteria at the Viazul station was fleecing foreigners by selling everything double price to non-Cubans and then the workers pocketing the difference. Perhaps I would do the same if I was paid 20 bucks a month. Places like this remind me why I wanted to get out of Havana in the first place. 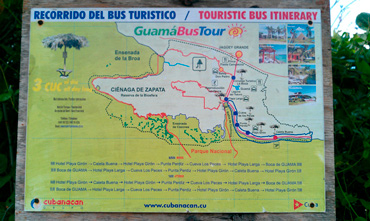 My first stop was Playa Larga, located at the finger tip of the Pay of Pigs. There was a friendly enough local greeting me as I departed the bus and offered to show me to a Casa Particular (bed and breakfast) or arrange a diving excursion. I politely fled on my bike. If you do use this otherwise informal travel agent the price goes up.

The town of Playa Larga itself is about 10 blocks long and 2 blocks wide, stretched out between the water and the swamp. There are some real dives as far as Casa Particulaes go. One had a crudely painted interior wall mural of a bare chested woman surrounded by what I suppose were roses. The provoked response was more creepy than sexy.

Fortunately there are some modern gems that cost from 20-30 CUC a night. Negotiate the price and if they don´t budge ask to include breakfast.

To stay away from the mosquitoes get a room on the second floor and enjoy the water from the roof terrace. If you want beachfront bring lots of bug spray. Unfortunately there is no fumigation campaign around the Bay of Pigs because the mosquito found there is the Culex, which spreads neither Dengue nor Chikungunya.

The food situation is around 10 CUC a plate if you stick to the tourist places like hotels and Casa Particulares. If you want some cheap grub head to the beach where the Cubans hang out near the Playa Larga Hotel (follow the reggeaton music).

However the real culinary surprise came on the second leg of my trip when heading up north to Boca de Guamá to visit the crocodile farm conceived of and designed by none other than Fidel Castro.

The way the workers at the farm tell it, El Comandante was flying over the area in a helicopter and saw some crocodiles and basically declared that there would be a world-class criadero de cocodrilos constructed right there. He then designed the layout of the facility himself. The farm hasn’t really changed since the day it was built and offers an interesting glimpse into the mentality of the man who ruled Cuba for so many years.

If you go be sure to ask the workers how they assign each reptile a serial number by clipping the spines along their tails. The intricate system allows the cold blooded creatures to be followed from their birth to when they are sold out the back door to a private restaurant owner.

Indeed all along the northern tip of the bay you can find crocodile on almost any menu. This was most apparent in Pálpite, between Boca de Guamá and Playa Larga.

Pálpite’s claim to fame announced by a giant billboard declaring the community the most northern point the invading Brigade 2506 reached during the Pay of Pigs operation in April 1961 before being routed and captured. Testament to the heavy fighting here are roadside memorials every few meters to fallen Revolutionary Armed Forces soldiers.

Present day Pálpite is composed a hundred or so concrete houses, about half of which serve as makeshift restaurants where the menus are not printed, but spoken in a whisper.

You can dine on deer meat, hunted in the Zapata swamp, sea turtle, taken from the waters outside the bay, lobster, crocodile, and various species of fish. Aside from catering in exotic meats to hungry adventurers the locals say there isn´t much other way to earn hard currency in Pálpite. Like much illegal activity in Cuba this is an open secret, a necessity of survival…and quite tasty.

My objective on the rest of the trip was to explore the east side of the bay via bicycle. Most of the distances are 20-30Km, making for super easy day trips on perfectly flat coastal road.

I found that the ride south from Playa Larga to la Cueva de los Peces offers several beaches ignored by tourists and praised by locals. The beach at the Campamiento de los Pioneros, or the children´s camp, a few kilometers south of Playa Larga is said to be the best. There is a custodian at the gate who will probably let you in for free, but tip him or her a couple of CUC anyway.

Punto Perdiz is the primary diving/snorkeling site between Playa Larga and Playa Girón, however there are several other immersion areas that offer cheaper access and more affordable food and drinks. Two kilometers north of Punto Perdiz is El Tanque which had some seaside grilled fish and ice cold beers plus easy snorkeling access.

Playa Girón itself is more built out than Playa Larga, with pretty much the same casa particular situation. The beach is shared with the busy hotel, so get ready for company.

For an all-inclusive Cuban-style day trip take the bus to Caleta Buena where for 15 CUC you get all you can swim, snorkel, drink and eat from 9AM-5PM. Great place to practice your Spanish and meet Cubans on holiday.

If you are on bicycle you might want to think about stocking up on food, water, and a spare tube or two and head to Cienfuegos via the old coastal road which has been all but abandoned by vehicle traffic due to its dreadful state. I wasn’t prepared to make the ride, but whoever does will probably get a glimpse of part of Cuban seen by few, if any, outsiders.