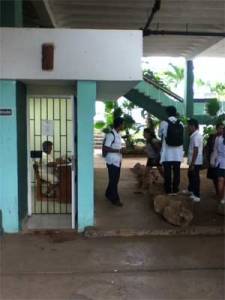 HAVANA TIMES — I have less than 100 hours left before I will leave the Latin American School of Medicine (ELAM) as a boarding student.

The coming academic year I will be sent to Havana City, most likely to the Salvador Allende Hospital, where I will complete my medical training. But not everyone is going to Salvador Allende, or even Havana.

We are to be split up and spread amongst the various provinces of Cuba. The reason for this is that in the third year of the medical program we begin clinical training based out of different hospitals all over country.

This academic and social change we undergo is called “going to provincia”. It is the topic on everyone’s minds at the moment.

For many, it is just as important as their final exams. In addition to awaiting provincia assignments we are also hearing that after next year Cuba will end their free scholarship program for the vast majority of participating countries (now numbering more than 90).

I think it is unfortunate how final exams and worrying about where we will be sent for our third year has kept many people from realizing that we might not ever see one another after these summer vacations.

One friend pointed out that we are more likely to talk on Facebook or Skype when we are outside of Cuba than see each other inside the country.

Like many angsty youth on the island we were really holding out for the undersea cable from Venezuela, but it looks like our Facebooking and Skyping will have to wait until summer vacations or after graduation.

Of course we also recently learned that we could be one of the last classes graduating from the ELAM project.

I heard that the original ELAM plan had the school in operation for 10 years, after which it would close. If that is true, then we are now a few years past that.

Rumors (for me even a “confirmed” rumor in Cuba is still just a rumor) have it that next year’s enrollment will be the last class to enter the free scholarship program.

That makes sense according to the original plan, but I guess we’ll have to wait until we read it in Granma or Cubadebate before we can know a slightly more objective truth.

The new system of medical education for foreigners in Cuba will be self-financed, which can be interpreted as “you pay us money, and we will educate you”.

This is a very similar system that is used in the United States. Indeed, look at any international tuition rate for any university in my home country and you will quickly see why foreign students are such a boon to their finances.

I wonder how the self-financed students will live, if indeed they do go to the same university, the Latin American School of Medicine campus, which we are getting ready to leave.

Will they have to stay on campus between Monday and Friday, unless they get a pass?  Will they need permission to travel?

Maybe the professors and workers lives will change as well. Since the self-financed students will be paying in hard currency (convertible pesos) will the paychecks for the school employees be in hard currency or remain in regular Cuban pesos?

Will the United States Treasury Department honor travel licenses to United States students who are paying the Cuban Government for their education in Cuba?

Finally, will students still have to go to provincia wherever the school sends them to, or will they be able to apply to different hospitals and different cities, maybe even some costing different prices than others?

I imagine that they will have to go through the same rituals of parting ways and losing contact as we are going through now.

All of these are questions that become relevant when the relationship between the students and the school changes. In this case the determinant of that change is money.

I can hardly imagine the two situations will turn out to be the same, but I can’t say I know enough to predict exactly what the differences will be.

I do know that the increasingly exploitative and predatory mannerisms of United States universities toward student’s pocket books and credit lines were one of the main reasons why I chose and continue to choose Cuba.

So it troubles me to some extent that their tertiary educational model is moving a little closer towards ours.

At least the Cubans have the advantage of learning from our mistakes, should they choose to.

One thought on “Future Doctors Off to the Provinces”