And its future in Cuba

HAVANA TIMES — In 1979 Rotary International, the world’s largest service organization with clubs in over 120 countries, laid the foundation for a program to rid the world of polio, which became to be known as Polio Plus. Coincidently, the same year Cuba was put on a list of countries where Rotary Clubs were no longer allowed to be chartered.

During the past decades Polio transmission has been eliminated in all but three or four places on our planet. The effort has been tremendous, with multiple service groups, health organizations and The United Nations making contributions. Cuba has been there along the way, sharing its experience of having eliminated natural polio transmission by the mid 1960’s.

Even though Cuba has played a role in this project with its tens of thousands of doctors in dozens countries, working in some of the world’s most rural and underdeveloped areas, Rotary International has yet to charter any new clubs on the island.

The Havana Rotary Club was the first Rotary Club to be founded outside an English speaking country, and within 30 years of its founding there were close to 60 other clubs across the island. Rotary had such a strong presence in Cuba that Havana was selected as the site of the 1940 Rotary International Convention. It was here in Havana that Rotary issued a desperate call for peace on the doorstep to World War II. Cuban nationals served on three different occasions as President of Rotary International.

As far as public record goes the Cuban government never had a problem with Rotary. As with other social and service organizations present on the island (such as the Odd Fellows, Masons, and Red Cross) respect for local laws and sovereignty is expected. As Rotary has an apolitical mandate and exists in almost every country in the world respecting local law will not likely be a problem in Cuba. 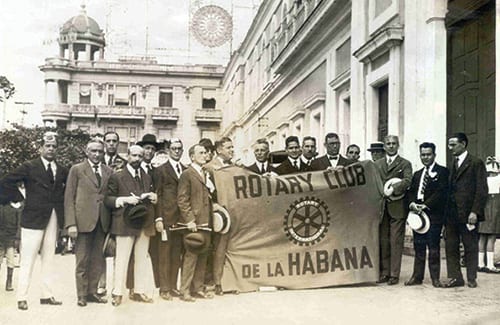 Rotary’s Polio Plus program to eliminate polio transmission worldwide is just one example of the potential collaborative space that the organization has in common with Cuba. Cultural exchange, projects focused on the environment, healthcare, ensuring clean water, university scholarships and working towards global friendship while respecting identity and celebrating differences are all parts of what makes Rotary what it is.

The 100th anniversary of the founding of the Rotary Club of Havana should be seen as an opportunity for Rotary International to reach out and once again let clubs be chartered on this Caribbean island nation.