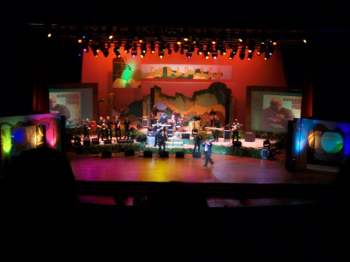 Gala season has started at the Latin American School of Medicine in Havana, Cuba. Every year each country, or region, of the world represented at ELAM puts together a cultural variety show that usually includes a few lines on history, a few more on contemporary society and plenty of dancing.

The gala of the United States of America was last Thursday and I spent all week seeing signs promoting the event. One sign in particular caught my attention. It was a sign advertising the gala which used a hand drawn American flag as the background. However this American flag was drawn upside down. Tacky, right? This bothered me enough to reflect on the subject more than I wanted to, and that is why this diary is not going to be about galas or dancing.

First, it is clear the Cuban government has nothing against the flag of the United States of America. I can think of at least two, displayed as they were meant to be, at the Latin American School of Medicine. So this upside down display of the flag had nothing to do with any Cuban aversion to the stars and stripes. Rather, this has everything to do with symbolism and America.

Flags are symbols, just as language is spoken symbols and words are written symbols; we communicate in symbols. And symbols can be deployed and interpreted in as many ways as human beings can think to use them. 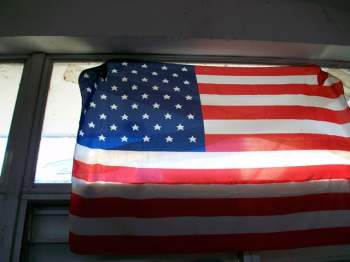 Revolutionary Cubans fly the same Cuban flag as those Counter Revolutionary Cubans in Miami. My roommates from Honduras display their flag even though their elected president was overthrown in an illegal coup d’état. For many people flags are permanent symbols of what their nations are capable of in much different situations than they currently exist. Flags can symbolize ideals, and the possibility to achieve those ideals against seemingly insurmountable opposition.

But, of course, we US Americans are different. I think this has a lot to do with us being a reactionary nation. The ideals that our country was founded on were not centralized plans or manifestos of desired predetermined outcomes. Rather, our founding ideals gave us inertia, and not much more. It was, and is, up to us to give that inertia direction. So we live in American experiences that unfold rapidly, and when we see something we don’t like, or face a crisis, we react. And these reactions, just or unjust, are how we realize such rapid changes among such a diverse and massive gathering of humanity.

So I think that it is the uncharted destiny of the USA and the freedoms that come with this unknowingness that give our flag that symbol that all flags must eventually have: the symbol of unity. Even when people are drawing it upside down they are doing that because our American culture allows them to feel that they should and allows the rest of us, no matter how much we find it tacky, to see their protest as part of America. It is the protesters paradox. The flag in protest is of the same nation, and ideals, of the flag on the staff.