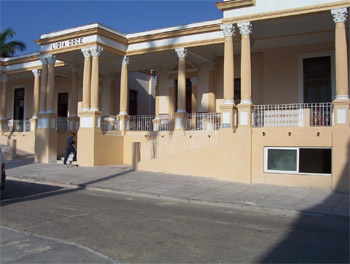 HAVANA TIMES — I’m at the Dr. Salvador Allende Hospital in Cerro, a neighborhood in south-central Havana. Because the hospital is named after a somewhat recent historical figure and socialist martyr my expectation was to find a building of Soviet construction: an uninspired structure from the later half of last century.

Instead I find myself at a hospital campus that should be the set of any period movie set in 19th century Europe.

There are dozens of structures, most of them serving as wards. In a typical ward a central hallway divides the two sides of the building. Each side is a series of rooms with three to four beds, night stands, and chairs. Giant patios surround each building, and it is common that patients pass their time outside, taking intravenous drips with them.

Some of the buildings have been recently renovated. Others are shells of their former selves, in disuse, and look to be the source of raw materials to keep the other buildings in functioning condition. There is plenty of green space, with gardens and walkways around all the buildings. My favorite quite moments are in the early morning hours looking up at the silhouettes of the royal palms against a night sky made starless by the city lights.

The hospital grew to its grandeur in the early 20th century, before its namesake was even born. Looking around at the old buildings and the massiveness of what the hospital was in its heyday it is no wonder that it used to be the principal hospital of La Habana.

In those days, when the links of first generation Spanish immigrants were stronger with their European homeland than they are today, the hospital was called the Covadonga. The Covadonga is the name of a city and famous battle, fought over a thousand years ago, in Spain between the Asturians (Christian) and the Moors (Muslim). 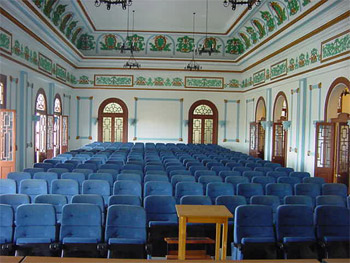 The battle was won by the Asturians, who claimed the right to establish the Kingdom of Asturia. Thus the principal administration building at the hospital still bears the name “Asturias”. Almost every other hospital ward building has been given newer, more revolutionary names.

It was in between the building “Asturias” and the hospital ward “Jesus Menendez” that I learned what it was like to be in a class group with only Cubans. It was my second day of class and after leaving “Asturias” where we receive lecture at eight in the morning.

After class I walked to the hospital ward “Jesus Menendez” to start rounds. I looked for my classmates before seeing our professor who then asked me where the others were. I said I didn’t know and she assigned me a room to attend to.

About twenty minutes later my classmates, all together, walked the ward. I saw from a distance as their confidence in me was all but destroyed. The professor started asking them where they were. They said that class had just gotten out. A lie, yes, but considering how people treat time here it is not that big of a lie to say something “just happened” even if it passed more than 30 minutes ago.

So the professor then points to me, and asked how I arrived at the ward half an hour ago if class just got out. I was met with at least six sets of scornful eyes. I blew their cover story.

Later that day, with administrative ears out of hearing distance one of the Cuban group members told me, kindly, but with no uncertainty, that we were all to meet below the “Asturias” building after class to walk together to the ward. There was to be no flying solo.

So the next day we all met after class, at the designated spot. Several were visibly relieved to see me, and I offered apologies for what had happened yesterday. From there we all walked to a cafeteria on campus to get a bread with cheese and sugary drink. When we arrived to the wards, a bit late, the professor didn’t even notice the time. Because we had all arrived together she assumed that all was right with the world.

3 thoughts on “No Flying Solo in Cuba”