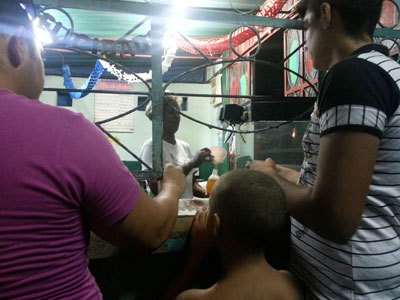 HAVANA TIMES — This month a 2.5 billion dollar a year tourist market opened within a hundred kilometers of the United States, but US citizens shouldn’t expect to reap any economic rewards.

In October the Cuban Government continued its slow march toward economic decentralization by allowing private contractors to bid for jobs in the tourist sector.

State operated tourist agencies such as Havana Tur and San Cristobal are now allowed to take package group tours to private restaurants and on excursions arranged by foreign companies.

It probably won’t be too long until private companies are offering climbing trips to Valle de Vinales and deep sea fishing charters that have something about Hemmingway in their name.

Sadly, if you are from the United States, the embargo/blockade of Cuba by our government effectively closes the newly opened tourist market to US based providers of goods and services.

On the Cuban side of the Straits of Florida there is still the immense problem that the Cuban government maintains a near monopoly on imports to the island.

Materials procurement will continue to remain a headache and maybe even a deal breaker for many start-ups.

However, the new Port of Mariel will begin functioning next year.  The plan at that point will probably be to hand over more and more importing power to the private sector.

Government involvement will shift from central economic planning to regulation enforcement and revenue generation through fines, fees, and taxes.

Basically opening Cuba to outside investment and imports will parallel the slow opening of the private domestic market over the past few years.

However, even this minor economic tinkering in the domestic Cuban market has been hampered by the US embargo/blockade.

More than a few Cubans I know work in computer programming, translation, and other services that they provide remotely via the internet.

Internet access is notoriously expensive in Cuba, but it does exist, and some Cubans use it to do business.

But even with their crappy internet access they can’t accept Paypal, or any other online payment provider that even have a server hosted in the United States.

The impact is that the largest online payment services in the western hemisphere are prohibited from facilitating business not only between Cuba and the United States, but Cuba and any country in the world.

So an hour of internet costs more than a beef cheeseburger and the U.S. government prohibits even the most basic forms of internet entrepreneurship on the island.  Cubans get screwed from both ends and their good ideas die.

Aside from limiting U.S. participation in the Cuban economy and stifling local Cuban entrepreneurs the U.S. embargo/blockade causes direct economic losses to the U.S. economy; to the tune of 500 million dollars in cash money.

In 2008 Cuba bought 700 million USD worth of goods, mostly exempted food and medical items, from the United States.  In 2011 that number has dropped to 200 million.

The decrease of U.S.-Cuba imports came about because Cuba, having a more capitalist mentality than many would like to admit, has started importing more from Brazil, China and Vietnam.  You can see that evidence at any Di-TuPollo stand or TRD Shop in Havana.

Take note that the U.S. Treasury regulation mandates that payment from Cuba to U.S. companies must be made in cash, so that loss was in hard currency.  Ouch.

13 thoughts on “US Citizens Losing Out on Emerging Cuban Market”