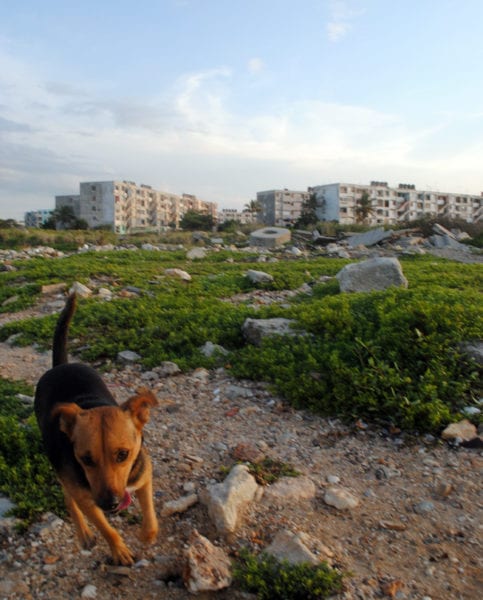 HAVANA TIMES — Alamar is unsettled, news of a rapist running around on the loose through the neighborhood’s streets interrupts any conversation, outshining the increase in agro-market prices and livening up lines. There are so many different versions; sometimes, dates get mixed up, the number of victims varies, but the reality is that people are very stressed about this issue.

People say that he raped a pregnant woman; that he continues to shamelessly prowl the areas where he had already committed his evil acts; some say that he doesn’t hit the women he attacks; others say that he stabs them. They have seen him, with a baseball cap deeply-set on his head, eating pizzas, changing money at a bank or sitting on a P3 urban bus.

One of the stories say that around Siberia (an area in Alamar), people took to the streets with sticks, pieces of rebar and knives to lynch him, but the police intervened and dressed him up in a uniform so they could take him out of the crowd uninjured.

Other versions, the one that really distresses people, is that he’s still out on the loose. The most mentioned thing up until now has been that the police have discovered his hiding place in the Micro X area, on the coast. The place has a rustic bed and other objects, but the rapist wasn’t there.

Some believe that he’s still in Alamar, others say that he has gone to neighboring Cojimar. An alleged photo of the rapist has begun to circulate on people’s cell phones, they say it’s from when he was a member of the “special troops”, that’s why this guy knows martial arts and has been able to get away from the police on several occasions and save his behind. He hides in fenced backyards because he can jump fences, etc. The legend is quickly growing. Nobody knows if it is totally certain. Some police officers smile when asked: that’s make believe, they respond, but later another story is passed on from mouth  to mouth and movie continues.

Although people are angry with the man, many comments put the focus on the possible victims: don’t dress like that, don’t go out at night or don’t walk alone because there’s a rapist out there, are phrases that accompany their daily hustle and bustle…

In September, there had already been word about two fugitives running from the law who had come to Alamar to dock there. This wasn’t an official piece of news, it was radio bemba (word of mouth) that spread this news.

Not too long ago, I found out about the violent arrest of a gang specializing in theft who used to run their operations in the neighborhood, the majority of its members used to live near my building and used to visit my block. I didn’t find out about this via official media either, nor from any local authority, but from neighbor’s comments.

After Hurricane Irma, streetlights are out and the darkness, as we all know, can be an accomplice for these kinds of people.

The lack of verified information about issues that concern citizens, which involve our safety, as well as encouraging fear, creates disturbance among the population. People need to know whether there is still a rapist lurking around the corner, if any of our daughters or female friends – or ourselves – can suffer at his hands.

Local authorities need to say what is going on: is he running around on the loose or not? Does the rapist in fact exist or is it all made up like some say?  It’s a serious mistake to continue to ignore the people who, in this case, are the ones being directly affected. If he is out on the street, the authorities need to say if they have identified him already or at least give an update on the stage of their investigation. If he doesn’t exist they should put an end to the uncertainty.

If there is a photo of him, they need to make it visible to everyone, in a true “Wanted” style poster. This would bring a lot of relief to people, as it proves that justice will come and it will prevent residents, who are angry and fired up at these kinds of events, from taking justice into their own hands.