—I hadn’t yet mentioned that I live in Alamar (wing-of-the-sea). It’s a pretty name, and the place is pretty as well. The place, not the buildings. Here the sky is a pallet of colors that any painter would envy. The ocean breathes so close to me that when I travel anywhere I transport a bit of saltpeter in my pores. 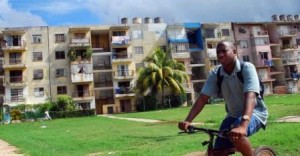 The suburb is 13 kilometers from Havana, about 25 minutes by car. But of course, if you use the bus it takes a little more time. A lot more time. Sometimes too much. That depends on the fuel supply and the number of buses that are in good shape. A few months ago, leaving Alamar was a true odyssey. Now the situation is better, since new yellow and grey buses have arrived. I believe they came from the Ukraine.

In order to go to Old Havana, Central Havana, Vedado or any other municipality that’s not part of the periphery, you have to pass through the Bay Tunnel. It feels like I’m riding in the Beatles’ Yellow Submarine and I hum a tune as I go, making the trip seem shorter. 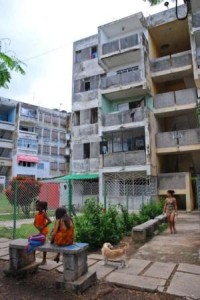 Building began in Alamar in 1970, with the hope of providing housing for tens of thousands of people. The original blueprint for the suburb was marvelous, but different economic crises facing the country have prevented the project from full development. There are buildings, houses, markets, parks, a movie theater, a cultural center, a funeral parlor, and a bookstore. There are also some factories, many schools and two libraries.

Perhaps because of its poetic name, this suburb has become a gathering place for a large number of artists: poets, dancers, narrators, musicians, artists. The Fayad Jamis Center of Art and Literature is quite active. In the decade of the 80s the Performance movement was strongly embraced here. Today, graffiti marks the almost identical buildings that fill the suburb. Phrases of love, patriotic slogans or simply names of people or things in different colors receive visitors. Or, at times horrify them.

Ah! I forgot the sun, the protagonist of the daily routine; without its yellow light this wing of the sea wouldn’t be the same.