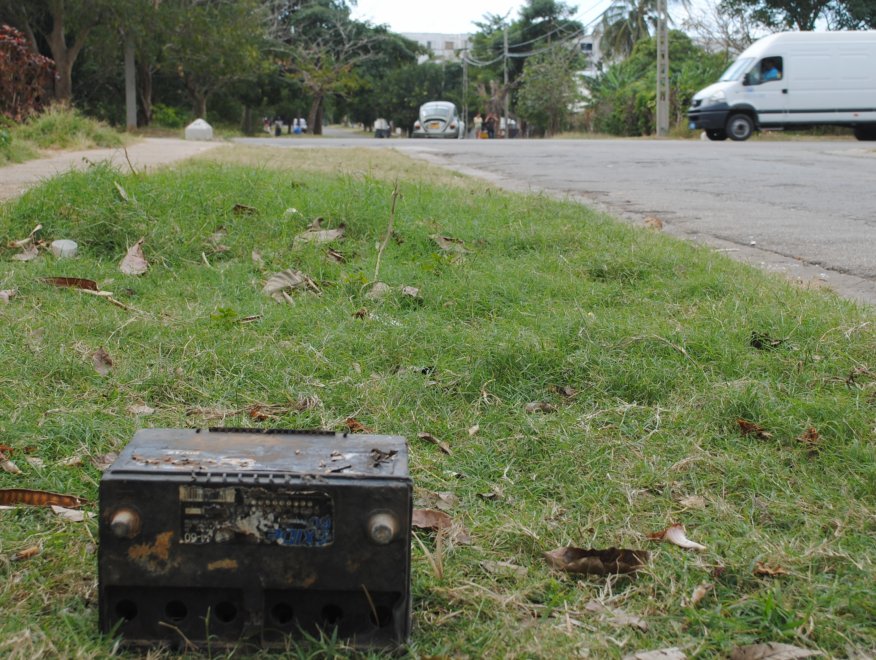 It was December 30, when Cuban stores either close early or they don’t open at all.  So there was no alternative but to go shopping if I didn’t want to run short of food over the holidays.  My friend Erasmo accompanied me to the farmers market; we needed to buy fruits and vegetables to counteract the flu that didn’t seem to want to let go of us.  I took the camera thinking that there is always something new there… and that’s what we stumbled on.

In addition to enjoying the pleasant weather, with my dog running in all directions, along the way we didn’t cease to be surprised by the garbage piled up all over and the number of car batteries in the streets.  We always talk about how to improve our environment, and since recently the Granma newspaper had an article on lead poisoning, we were then convinced that it was necessary to do something more so that people would know what we are all being exposed to.

I quickly took out the camera and the outing turned into a worrisome expedition.  Very close to houses, in trash cans or yards, laid batteries discarded by people who were unconscious or ignorant of the amount of heavy metals contained in this debris.

In a yard in Zone 6 of Alamar we stopped to take a photo.  A concerned resident yelled down to us from the fourth floor asking what we were looking for there.  We responded immediately and continued on our way.  When returning along that same street, the resident was already on the first floor of the building with his hands on his waist and a cigar stuck in his mouth.  Insolently, he asked us the same thing again, emphasizing the words “looking for.”

Patiently, and accustomed to the negative effect of cameras on human beings (at least in Cuba), we responded that we were only taking photos of the batteries and that we weren’t look for anything, but instead finding them.

The man didn’t lower his guard; he only shifted his angle a little and responded that the neighbors leave the batteries wherever and that they need to remove them from their side yards and the garages.

But this irascible resident didn’t seem worried about the consequences of this action, only the aesthetics of the neighborhood.  Then, after taking the photos, buying the food and returning home, we decided to do something more serious for the readers of Havana Times. We agreed to investigate a little more into this issue.  That’s what we’re doing now.