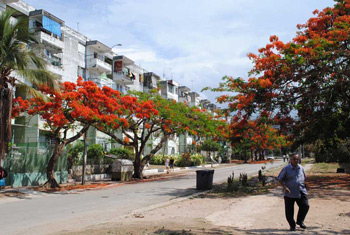 HAVANA TIMES — My building was constructed in the mid-70s, in the midst of severe material shortages. The families who moved into the building had been without a home for years and therefore didn’t care that it was far from the city center or that the apartments were poorly finished – that monolithic block of concrete in the middle of nowhere was a palace to them.

The Microbrigadas project, Cuba’s serial construction project, was at its peak and the people involved in it (in my building’s case, these were journalists, typesetters, book binders, secretaries and designers) became bricklayers, plumbers, electricians, etc., on the go.

There was no previous training: daily practice and creative problem-solving was the way people learned. This way, stumbling along, learning and making things up as they went, thousands of people built their own homes in the budding neighborhood to the east of the city.

One of the weak points of this process was that the future tenants weren’t allowed to choose the materials they needed or wanted, but had to take the ones assigned to them by the State. For instance, not enough tiles were assigned to our building and, as a quick and cheap solution, bathrooms and kitchens were finished with plaster – a bad-quality plaster that has managed to survive with a measure of dignity for over 40 years. At first, it didn’t look so bad – time, the improper use of cleaning products and humidity gradually deteriorated it.

Some of the tenants managed to fix up their homes little by little, but some of us have taken much longer to do so. Marina is one neighbor who couldn’t stand having a bathroom in such condition. She was tired of the dark stains on the walls and the large pores that opened up on the rugged surface of the plaster. No matter how much she wiped the wall, it never looked good. Marina, however, is retired, and even though she works part time at a school to earn something on top of her pension, the money wasn’t enough to go on, let alone to think about undertaking home repairs.

Months ago, she got wind that the State was subsidizing the sale of building materials and invoked Agreement No. 7155 of December 13, 2011, issued by the Executive Committee of the Council of Ministers, an instrument that provides for aid to the victims of natural disasters and people without the needed financial resources to build or repair their homes.

She quickly submitted her application at the Municipal Housing Office. She waited for the Municipal Labor Bureau to assess the socio-economic situation of her family and for her case to be reviewed by the Administrative Council of the Municipal People’s Power, which finally granted her the subsidy.

Happy with her nearly 5,000-peso cheque (250 usd), she bagan finding out prices. She knew she could buy some products at a number of hard-currency hardware stores (at a 25 Pesos to 1 Cuban Convertible Peso exchange rate) and construction sites. It looked easy: she would fix her bathroom in no time.

Marina still doesn’t know why, but, when she went to the construction site to buy the materials, she found everything she needed. She got her hands on the tiles, the white cement and liners offered in Cuban pesos in merely three trips (her aim was merely to tile the bathroom). She got lucky. There are those who take months to find these materials and have to ask for an extension of the subsidy because of lack of materials.

At the time, transportation expenses were not included in the credit. She had to pay a bici-taxi to take the sacks and boxes of materials to the building and two young men to take these up to the fourth floor, where she lives, out of her own pocket. 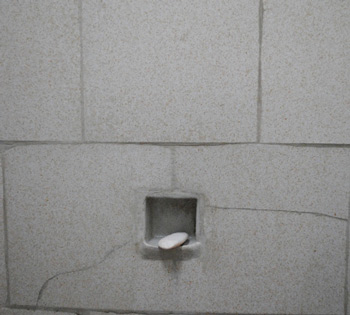 Suddenly, she ran into the first obstacle. Where was she to find a bricklayer who would do the job for so little? The 1,300 pesos (or 52 CUC) destined to construction work is much less than what self-employed bricklayers charge (which is almost five times that amount).

These problems, however, were nothing compared to the ones they ran into it when the work began and they discovered that the tiles she had bought cracked at the slightest touch. What was she to do, when the money from the State check had run out and she had no savings? There was but one solution: to install the broken tiles.

It would seem Marina’s bathroom is destined to failure: all the repairs have afforded her is a bit more cleanliness and the fear that a bit of tile will fall off the wall at any moment.

The idea behind these subsidies must be reviewed in greater depth, for their aim is, supposedly, to help people, not give them more headaches. It would have to be conceived as a package that isn’t limited to the money but also includes a staff of bricklayers willing to charge the amount that the State allots, transporters that will take the materials to one’s house and, if necessary (as in the case of Alamar), haul them up a flight of stairs, as well as technicians that can vouch for the quality of the materials. Why do they allow poor-quality products with awful finishes on the market? Why is everything sold in Cuban pesos crude, horrible and badly-made?

I know this is a subsidy but it needs to be re-thought, particularly because it is conceived to help those in greatest need – generally elderly people who have worked their entire lives. Now, drained of energies, they look to State subsidies as a lifeline, something with which they can repair those badly-built apartments that were once a point of pride and cause for joy, apartments that are today in ruins.

One thought on “Cuba: Subsidy or Suicide?”