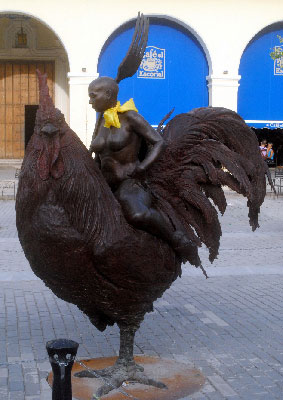 HAVANA TIMES — Much is being said about Cuba’s recent yellow-ribbon campaign. What was most striking about the whole process, for me, was seeing how easily people buy into a given product or message. Of course, everything depends on how such a product is advertised.

This campaign was based on a love story. Many years of watching cheesy soap operas have made us receptive – or more receptive than we were to begin with – to such mushy and tired ideas as eternal love, fidelity in marriage, the mother who never betrays her children and other clichés.

From the start, it was clear that involving many people in the campaign wouldn’t be difficult. First, you identify a given value (fidelity) and associate it with a specific color (yellow). Then, you tell a pretty and moving story and tell people what they have to do. After that, you start hanging up yellow ribbons around the city…confident the fire will spread.

On the morning of September 12, the streets were flooded by a yellow tide: yellow blouses, undershirts, ribbons, earrings, t-shirts, bands hanging from balconies, tied to windshield wipers and tacked to the doors of houses.

Many of us asked ourselves if people were simply going through the motions (as in most campaigns in Cuba) or if they were genuinely demanding justice for the Cubans imprisoned in the United States. After listening to the “masses”, I have to conclude that, whatever their motives, most people were actually, emotionally involved in the campaign.

Some people even showed a bit of creativity. Not everyone used the yellow ribbons the State sold. A number of people were more discrete and latched yellow origami figures to their key chains. Others simply opted to wear a yellow collar.

On the bus, I heard a group of young people talking about the consequences of the lack of freedom, “about those poor guys, dude, who’re in the slammer.”

The phoniest spectacle I saw involved a group of children who, standing in a square in Alamar, shouted “freedom!” repeatedly, while their teacher asked them to be quiet and warned them that they would go on rehearsing until everyone yelled the words as loud as they could. This and, of course, the spots we were bombarded with for days through Cuban television.

I am actually surprised at the enthusiasm people showed. Recently, we had a campaign against gender-related violence. Violet was the color chosen for the campaign (I’ve been told this is feminism’s representative color). Very few people joined the campaign, however. 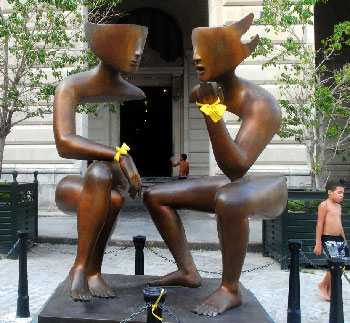 The campaign poster girl was Cuban singer Rochy. While it is true that she is not that popular, one would think that, in a country with so much political apathy, young people would be more prone to follow an artist than a political spokesperson such as Rene (the one member of the Cuban Five who has served his prison term and been released).

Rochy and her gang took a message of peace and equality among men and women to all of the country’s provinces, but did not manage to involve that many people in the campaign.

Some time before, singer-songwriter Haila (who is much more popular) headed a campaign sponsored by the UN Secretary General, also calling for an end to violence against women and little girls.

Haila, known as the “People’s Diva”, appeared in a poster showing a hand with a single nail painted violet. This, however, did not catch on among young people on the island.

I am surprised because the campaign calling for the release of the Five (who are now actually four) revolves around an isolated case which involves only the imprisoned agents and their families, while gender-related violence is a wide-encompassing phenomenon which affects the majority of Cuban families.

I am not suggesting that a campaign impose a certain color on a given issue. It’s clear to me that wearing this or that color doesn’t actually change anything.

What the yellow-ribbon campaign has shown me is that the Party-State is clever when it wants to be, and could well impel (or support) a good campaign against domestic violence, using different mechanisms and plenty of originality, appealing to mushy clichés or not, and raising people’s awareness in this connection, to the point of formulating a specific law related to this issue. My question, therefore, is: what’s it waiting for?