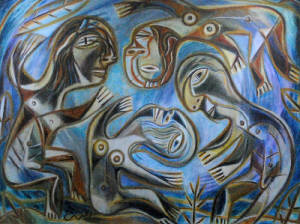 HAVANA TIMES — Throughout the month of August, Old Havana’s Center for the Development of the Visual Arts was the venue of an interesting and attractive exhibition titled Drapetomania: A Homage to Cuba’s Grupo Antillano.

When I told a friend I wanted to go see the exhibition, I was surprised by her reply: “Yes, more of the same. I’m a little bit tired of African culture, to be honest.” I thought about it, and I can see why people may feel this way.

It’s true that a number of artists use a whole series of hackneyed visual and aesthetic codes (often stereotypes) to invoke this culture, and what they end up doing is divesting it of content and depriving it of its strength. We also have to admit there is a market for that.

At the close of the polemical 70s, however, things were quite different.

In 1978, a group of artists and intellectuals set out and managed to underscore the significant role played by Caribbean and African cultural elements in the formation of the Cuban nation and its culture. To do this, they had to confront the widespread belief that religious and cultural practices of African origin were backward and born of ignorance (which is the reason such practices were marginalized). 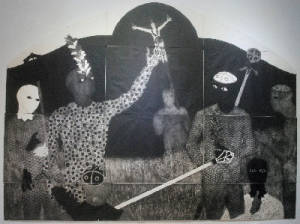 The title of the exhibition, Drapetomania, alludes to a disease first diagnosed in the 19th century. It refers to the alleged “mania” suffered by slaves who sought to escape, run away, flee. According to the physician responsible for the concept, run-away slaves suffered from a condition. To him, that slaves should want to be free was a sign of disorientation or delirium. Cuba’s Grupo Antillano turned this claim around, presenting the run-away slave as an emblem of resistance.

In its five years of work, Grupo Antillano used art to re-frame the essence of the African and Caribbean traditions that surround us, including the resistance and longing for freedom they embody, demonstrating that these countries have a continuing influence on our country’s culture.

Unfortunately, this movement became something of a fashion which would saturate cinema, visual arts and literature with elements of Afro-Cuban culture, most often caricatures and at times derisive portrayals. This is why I feel an exhibition which reminds us how art can be used in the struggle for freedom is important.

As these kinds of events do not attract a large audience (save perhaps on the day of the opening), not many were able to enjoy the powerful works gathered in this exhibition.

One thought on “Drapetomania: An Exhibition on the Art of Resistance”