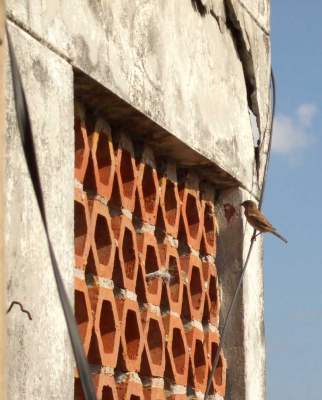 HAVANA TIMES — Ana Rivero is demanding an answer: “The leaks haven’t been fixed. The ceilings are caving in the apartments on the upper floors.”

Meanwhile another neighbor, Mary Coche, said that the paint used on the facade was off very poor quality and is already peeling.

No, I’m not talking about my building in Havana. I’m referring to Block 3 of Pinto Salinas in the El Recreo Parish in Venezuela.

An article entitled “They Left the Building Repairs Half-Finished” came out in the newspaper Ultimas Noticias. I saw it by chance in an edition that is just over a year old, but I could immediately identify with it.

I’ve already talked here about the water leaks that my building here on the outskirts of Havana has suffered for years, as well as when the crew that came to repair the problem.

What I haven’t said is that the waterproofing done to the roof wasn’t properly applied and now water is getting into all the apartments on the higher floors. My unit had been the one that was most affected, but now there are others in worse shape.

We know that when the rains come, the weather stripping they put on the roof quickly begins to deteriorate. Now the situation is almost back to the way it was before the repairs.

We also had to pay — dearly — for the paint that was put on the building’s facade. However, that same paint is already peeling since I’m sure it’s of poor quality.

What isn’t going to be paid for is the roof, at least according to the people at the Housing Department, but so far we haven’t succeeded getting someone responsible to ensure us that the work will be re-done and properly carried out.

The Venezuelan newspaper article to which I was referring at the beginning has an important detail: the residents requested a citizens’ assembly with Jacqueline Faria, the then head of government of the Capital District.

I don’t know if that meeting ever took place. What I do know is that they can demand it and also publish the petition in the newspaper.

In our case, we made a proposal at the Feedback Assembly with our local delegate (who was already aware, the proposal was only a formality) but we’re still waiting for action. Does anyone have any suggestions?

Fortunately — for our tranquility and our protection from the elements — this year it has barely rained. But then the rainy season is now upon us.

Reading old newspapers is exciting, even if they’re not from the country where you live. Here, for example, I learned a new word: “chucuta” (half-finished) – which unfortunately has a nice ring.