HAVANA TIMES — It was ten to 8 pm, the time the second screening begins at Havana’s La Rampa theater. We were waiting to go in and see the Turkish film Once Upon a Time in Anatolia, winner of the Grand Jury Award at Cannes. Ready to take in the 157-minute movie, we were waiting for the ticket booth to open.

The theater was hosting an afternoon musical performance and, by the looks of it, the employees there had planned to go home when the show ended. When they noticed our intention of going in to watch the film, their smiles turned to frowns and a strange energy filled the place – but we didn’t budge.

They told us that the film would not be screened if less than the people showed up to see it. It is a rather odd policy  which very few of us are aware of and which has never been officially announced.

There were nine people waiting in line when one of the theatre employees warned us that the film was boring as hell.

The ticket lady was looking at us contemptuously, as though we were letting her down or insulting her. Suddenly, she noticed that one of the women in line was wearing shorts.

There are no movie stills or posters announcing coming attractions on the glass doors of the movie theater, but next to the ticket booth one comes across several signs with the house rules on them.

One of them says one cannot go into the theater wearing shorts or a tank top. I recalled I had a pareu in my backpack and gave it to the young woman so that she would wear it as a skirt. The employees gave us dirty, uncomfortable looks, but they sold us the tickets in the end. 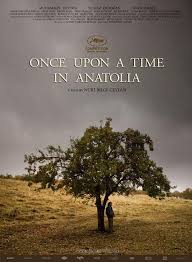 Images of a road cutting across a steppe. The headlights of three cars illuminate the screen. Several police officers, a judge, a doctor and a suspect in handcuffs (who does not remember where the scene of the crime is) are traveling inside these cars. This is an opportunity to discover a place and characters we are unfamiliar with and that have nothing to do with Hollywood clichés – all-too-human police officers who have doubts and are deceived by the prisoners while desperately searching for a corpse, people who reflect on their own existence. A serious and promising beginning.

The cars travel from one place to another. As time passes, the men converse about divorce, the quality of yogurt, women, the mysteries of life and of death. They make a stop at a small town and, there, while they eat and chat with the mayor, there is a power cut. The darkness persists for several minutes, until they resume their search on the road. Dawn breaks and the suspect recalls where the corpse is buried. The men dig, find the corpse and…the screen goes black.

The theatre was sweltering. We could swear that the AC wasn’t broken and that they wanted to force us out with the heat.

We had gone into the movie theater feeling that anything could happen – from someone telling us the projector had broken down to a power cut. The fact it happened exactly an hour and a half into the film, the duration of a “regular” movie, convinced us that it was done deliberately. We remained seated, two emergency lights lighting the theater while we waited. We heard the classic phrase: “This is gonna take a while.”

An employee – or so we think – invited us to leave. Suddenly, the lights up in the projection room went on and we thought the blackout had ended, but the guy insisted there was no power and that those too were emergency lights.

The entire movie theater was lit up, as were the surrounding buildings on 23 street. Suspecting we had been duped, six of us frustrated spectators went to speak with the manager.

At first, the woman didn’t want to talk to us. When one of the spectators called her, she came back to talk to us. “It’s not my fault. A phase in the theatre went, it won’t be fixed until tomorrow. We’ve had to keep the theatre open even without running water here. I couldn’t get through to the electrical company,” the woman said defensively, feeling under interrogation.

She told us that, if it were up to her, La Rampa would not screen films like this one because no one wants to see them, that, unfortunately, the theater manager doesn’t get to decide what’s shown. She cynically refuted our suspicions of sabotage and didn’t like it one bit when someone asked the projectionist to go into the projection room to verify there was no electricity.

“You’re being disrespectful,” she said. According to her, we were ignoring her and, what’s worse, judging her. Offended, she refused to hear our answer: we had asked the projectionist to do this in order not to jump to any conclusions.

She reminded us she was 60 years old and the time she’d been working there. Then, she angrily retired to her office.

A young man had gone up into the projection room and come back to confirm our suspicions: there was power in the theater; they had simply shut off the projector to be able to go home earlier.

We went back to the manager’s office, told her this and left. We didn’t hear anyone apologize. Who cares if we lost time and money going to the theater, if we had to sit in a hot cinema (even though there was no sign saying the AC was broken anywhere) and the fact it was the film’s last screening? Who cares if, in the end, we found out they had lied to us?

It still bothers me every time I think about it. After catching them red-handed, we should have demanded they screen the film. Even if that would have meant sleeping out on the street after missing the last bus home, I am sure the night would have seemed magical to us.