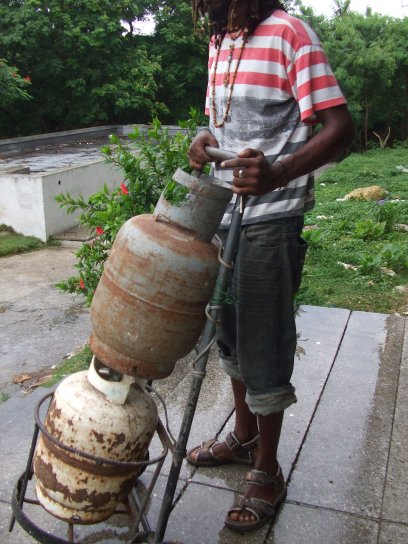 HAVANA TIMES — It’s 10:00 am and raining every few minutes, but I’m merrily heading on my way home. I was just able to buy a gas canister.

“Gas is here,” is the most common expression heard these days in Zones 7 and 8 in the Alamar housing project neighborhood.

The customary crises at our gas cylinder sales point, which brings so many consumers together, reaches a climax in December. This year it has started a little earlier, and since early November the lines have been endless.

Although no one with any real knowledge of the details of the problem is explaining things to the public, and though it’s known that the gas company hasn’t stopped producing gas, at this particular sales outlet there aren’t enough gas canisters delivered daily. This is what causes a long line of “outstanding buyers” (people who don’t succeed in switching out there tanks on their assigned day).

The bottom line of the situation could be a bad distribution system, since other distribution outlets in the general area functioning properly.

In the midst of this nonsense, people are attempting to organize. They decided to create lists, some of which work, others that don’t.

For example, one person who doesn’t get a canister on their assigned day is put on a community-generated list, which means correcting the numbers on the official list and spending the early mornings monitoring the area for people trying to get in line early ahead of their number.

What they need to do is get a new number in line; of course this doesn’t respect the place of people on the official list.

However sometimes these lists work, as was the case with the one I was on, where I had the number 255 from Monday to Thursday. Of course the organizational capacity of whoever is overseeing the list is critical.

In this case, someone came up with the idea of posting the list in front of their house and organizing monitors (every hour a different person takes a turn). This avoided a parallel list that could then allow people to argue over who has priority.

Once this mechanism was established, when the list-keeper made their purchase (he was one of the first people) this person handed over the papers to another one who did a great job: this avoided people butting in line and they confronted people’s insults in an assertive but fair and even handed manner. I hate to say it, but since the guy was tall, strong and had a sharp voice — he was imposing in a certain respect — that was what kept the hardheads from otherwise trying to destabilize things.

Gas customers in the area are divided into three groups: the community, the delivery guys and some kiosk vendors nearby who haven’t been able to sell their products during this period of scarcity. “People’s priority,” or their place in line, is constantly discussed.

It’s the community that comes out worst in all of this, since the other groups (though they occasionally fight) form clans and help each other out. The individual consumers are each on their own and are more vulnerable, depending on their age, sex or guts.

Extreme situations can bring out the best or the worst in people, and in these types of lines you’ll see everything from camaraderie with the oldest people to the jerk-like behavior of people who steal or manipulate the list to get themselves a better place in line.

That’s what happened with the third list-keeper that had the 260th place in line, though they made their purchase long before I did. If the second list-keeper deserved applause (very few people thanked him), this third one deserved our collective repudiation and mockery. But he didn’t receive any acknowledgement either. People aren’t even aware of his wrongdoing.

After all this, I doubt if the list will remain effective. When I went for my canister there was still too much disorganization, which is what cheaters take advantage of to cut in line.

Where are the authorities?

The police station is 50 meters from the gas canister sales outlet. On one of the most contentious days, when machetes became involved (according to what I was told), people went looking for the police. However the law enforcement officers only suggested getting rid of the lists and forming the line on a first-come first-serve basis. They then left and haven’t reappeared.

When there is high emotion, little gas and lots of desperation, trying to maintain the line until the police arrive is useless. This encourages anyone to allow their friend or neighbors to cut in front of them. But the police only follow orders. If no one directs them to help keep the line organized, there’s therefore no reason for them to do anything.

Zones 7 and 8 of Alamar are expansive and well-populated. In these areas converge two or three electoral districts, but no delegate has showed up at any of these points of sale during this period.

None of them have sat to talk about the situation with their constituents or with other local authorities — including the manager of the gas company — to try to address the faulty distribution system or create some mechanism for organizing the line when it breaks down.

If our delegates don’t appear in times of crisis, when will they? This is why, until we run into one that truly represents the interests of the people — the people who elected them either by inertia or faith — I will continue voiding my ballot in each election period.

3 thoughts on “Organization in the Gas Line”