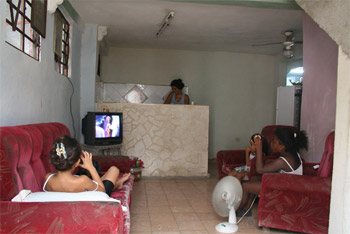 HAVANA TIMES, April 25 — Methodically and always overcoming any obstacles to her ritual, every evening — precisely at 6:30 p.m. — Graciela turns on her Chinese Panda-brand TV (earned through great sacrifice at her workplace) and doesn’t turn if off until the end of last telenovela.

Sitting there on the couch, usually half dozing off as she digests her food, she sits proudly in front of the reflections of Fidel, or suffers as she learns about Chavez’s illness, or is reminded of her years of total dedication to the revolutionary cause – at least until the first soap opera comes on.

Her moods frequently change, but what doesn’t vary is her television routine.

It’s a caravan consisting of the “Mesa Redonda” political commentary program, the evening news, and finally her beloved telenovelas. The first one is on the Cubavision network, which alternates between Cuban and Brazilian soaps; the second is on channel 27, usually from Brazil; and the third is on the Multivision network, which until a few days ago had a telenovela from Argentina).

Graciela is a professional who spends her days working. She hardly ever goes out after the job because the transportation system here in the outlying Alamar suburb has always been abysmal. At one time, when she didn’t have a TV, she would spend all of her evenings reading. Now she just wants to get home and turn on the Panda.

She’s now over 60 and her hearing has started to go, so she has to turn up the TV’s volume. There are loads of people like Graciela in the world, and also in Cuba. Stopping by to visit them during the telenovelas is a waste of time, they can’t talk to anyone. All of them sit there mindlessly gazing at the screen.

When I was little, we hardly even had soap operas, maybe there was one. But for quite some time now they’ve been the mainstay of Cuban life. Telenovelas are the best thing for not thinking about anything with any depth, they’re there to merely clear people’s minds or to just submerge people in the problems of others and ignore their own.

This all makes me think that there could be some order “from above” requiring the regular, uninterrupted showing of these shows. Each episode has a direct impact on the life, behavior, fashion consciousness, way of thinking about the world, and even the ideology of those who watch them.

In a somewhat contradictory fashion, Graciela says she feels comfortable watching those inane dramatizations; she forgets her frustrations and disappointments. However, soap operas emphasize that the world belongs to the victors. People get lost in phrases like:

– Tom, Jane’s boyfriend, is from a good family.
– My daughter’s wedding has got to be the best.
– My life is meaningless without him.
– I’ll never forgive you.

As much I try, I can’t understand what makes an intelligent professional, who in their youth was a transgressor, listening night after night to the most worn-out old clichés and looking at those cardboard characters staged in front of the obviously touristic backdrops of Brazil.

Graciela knows that in their glorification of banality, soap operas present strong moral convictions, convey deep-seated values and impose idealized feelings. Simplistically, the writers resolve conflicts by rewarding the good and punishing the sinful, yet she continues to become transfixed by them.

I find it funny to hear people who barely have enough to survive on discussing the problems of the rich and crazy daughter of the president of a large company, or wishing — passionately — that the heir to some fortune marries the maid (though from the very first episode everyone knows this is what’s going to happen). Because if telenovelas have one quality, it’s that they don’t fool anyone. People know they’re sitting there to watch a fictional world.

Recently on the bus, two women were talking about soap opera characters as if they were members of their own families – justifying one and damning the other.

Chances are that in their private lives these women will tend to mimic — if even unconsciously — the patterns of these episodes to learn what is right or not.

Cuban telenovelas are less accepted by the general public. Graciela, for example, doesn’t like them because she doesn’t want to see the same thing on TV that she sees in the street. Still, that doesn’t keep her from turning them on.

Most foreign soap operas that are shown in Cuba take place in lavish settings and reflect fewer problems than those of average Cubans, or at least they are problems completely unrelated to the ones here – and that’s what wins over the viewing audience.

Ours is a heterogeneous audience (in terms of gender, educational levels, living standards, etc.), which over time has begun to lend greater importance to the physical, the superficial and anything foreign. The characters they see every day on the screen have come to set the standards in terms of beauty, personal relationships or feelings.

It doesn’t matter that real life collides with all of this, or that these cause some degree of uncertainty or anxiety. When night comes, these serials will return to convince us how people should look, how a mother should be and what things should never happen in a marriage.

Lost in the sugarcoated panoramas of Brazil and the melodrama of Argentina, Graciela passes the last years of her life utterly absorbed in these soaps, and I don’t know if she even realizes it.

When walking home at night, through the open windows I can hear the heart-wrenching cries or the table-pounding laughter produced by the soaps. The streets are deserted during those hours, but I’ll hear the comments of my neighbors, and I think that I’m the one who must be out of their mind.