HAVANA TIMES — For an urban woman fed up of the city, its noise and pollution, living in the country can seem like a beautiful alternative. What I wouldn’t do to wake up every morning to the sounds of crickets or cicadas chirping whilst enjoying the great number of bird songs you can hear at this time of day. Who doesn’t want the privilege of gazing at the intense hues of sunsets without being disturbed by city lights?

However, it took just a few days of visiting and living with some rural families to realize that rural life isn’t all a bunch of roses; much least for women.

For quite some time now, daily routines have transformed that popular phrase which once said: the man is supposed to support the family, because women have left their homes to share public life too, working and studying as equals to men.

Furthermore, women take on their children’s education, looking after them when they’re sick and all the domestic chores, no matter how much it hurts us to admit; a large percentage of any rural household’s daily activity relies heavily on a woman.

Although there are some guajiros (farmers) who make coffee at certain times of the day, it’s the rural women who spend the majority of their day cooking. An x-ray of their lungs would show the same results as that of any hardcore smoker as kitchens mainly use wood, installed in small premises and without hardly any ventilation. Inhaling this smoke for hours on end, the female cooks are subject to chronic respiratory diseases or lung cancer, as well as allergic reactions and conjunctivitis.

Before cooking, many of them have to first look for, carry and cut wooden logs into smaller pieces to be able to light the stove. And age isn’t a factor. I’ve seen elderly women in their 70s and 80s who still do this. 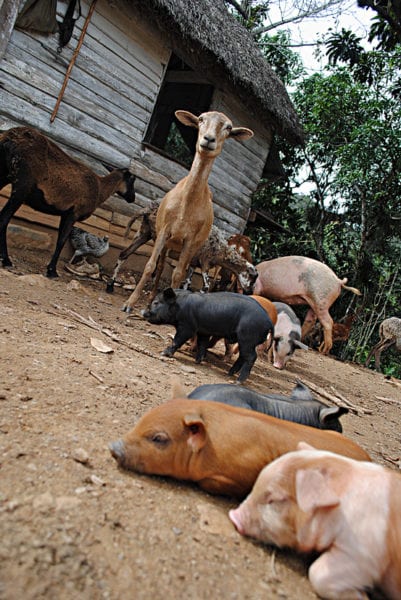 A lot of houses are also engaged in ram and pig breeding etc. Animals sleep in very close quarters to people so that they can look after and keep an eye on them. There these four-legged creatures happily urinate and shit on the single patio of the house where everyone passes by. A lot of the time, it’s the women who have to deal with the animals, feeding them, treating them and moving them around so they can eat fresh grass. The same goes for chickens, guineafowls… whatever you can think of… At sunset, just when the light is at its most beautiful, women are busy feeding animals and humans too. Most of the time, they miss seeing the beautiful twilight.

I’ve personally seen the unhappiness alcoholism creates in nearly all families. However, it’s nearly always a daily occurrence that the man gets drunk which brings out the worst in him, long-established prejudices and a most irritating state of joy. Rural women are always rubbing elbows with this drunkeness, whether it’s their husband, a brother, father or children. It always finds its way back to them and it seriously disturbs them.

Life for rural women isn’t poetic in any way, even though they don’t have to suffer the city’s aggressive nature and the hustle and bustle and even though they earn the same pay as men, they enjoy the same access to education and health services and can vote, with all of the benefits and drawbacks these issues have in the country’s social and political life.

Despite the gender equality workshops which are given at several agricultural cooperatives, women still bear the brunt of housework and family responsibility wherever they go. These workshops and some measures which aim to improve the lives of Cuban women as a whole, have helped them enter the workforce, in management roles, in jobs which aren’t typically “female”, and recognize their value as a social being. However, very few of them touch on the more personal subjects of family and tradition. In the countryside, women are still being exploited, are blamed if something goes wrong, are victims of prejudice and overburdened with work. Macho culture still gallants around the island’s rural areas, however beautiful they may be.

9 thoughts on “Women in the Cuban Countryside”