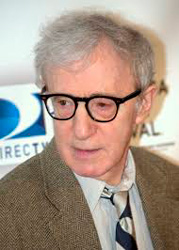 HAVANA TIMES — “The sun will burn out, whether we like it or not.” In other words, it doesn’t matter what we do in life: everything is a meaningless illusion, because nothing endures.

It is difficult to believe such admissions of hopelessness come from Woody Allen, a film director who has expertly portrayed the essence of life and human relations without asking for anyone’s permission. These discouraging words, spoken in the midst of a depression, one of the many artists suffer, come from someone who has mocked and attacked all manner of social conventions and institutions, including some as sacred as marriage and the family. Perhaps these are merely ironic statements, like the ones that abound in his films.

Our expectations and frustrations sometimes meet head on. Art also has a bad side to it sometimes, the imperfections that tear the artist apart and force them to improve, as though in a constant battle. I believe that what truly matters is the enthusiasm one invests into the process. Then comes the final outcome, which brings a quota of joy and frustration over its defects. Despite such defects, one works to have the work mean something – and if the work is good, it will leave its mark in those who know how to value it, despite its shortcomings.

With wise dialogues and hilarious situations – sometimes with heart-rending drama – this director has plucked all of life’s strings and continues to do so. I became addicted to his films, removed from the canons of an industry that restricts directors and is controlled by production companies, since I was first exposed to them, to that black sheep that has known how to find his way, filming in Europe, where is he revered as a film icon.

Going over his films in my mind, I think of Manhattan, a homage to New York and to George Gershwin’s music, beautifully shot in black and white, like a classic 1930s film. In The Purple Rose of Cairo, a housewife married to an abusive husband, falls madly in love with an actor. She goes to the movies every day to see the same film, until a miracle happens: the actor steps out of the screen to requite her love. The illusion irrupts into reality and draws us into Allen’s film, something we could translate as the unreal within the real. Who has never stepped into a film, or made love to an actor or actress? As a child, I had a recurrent fantasy with the adventure super-star Errol Flynn.

Match Point speaks of egotism, ambition and the way people climb the social ladder, a story similar to Theodore Dreiser’s An American Tragedy. In this film, Woody Allen plays a dangerous hand, impossible to hide under one’s sleeve. His blistering criticism is achieved through the main character. I also loved You Will Meet a Tall Dark Stranger, Deconstructing Harry, Blue Jazmin and other films that create the most picturesque personalities and their daily mix-ups.

Many hate his “intellectual” brand of humor. Those who enjoy it engage in a kind of “creative mental gymnastics.”

So, I welcome the depression and subsequent creation of a mad and modern world. We will continue to be connected to this neurotic dreamer, this irredeemable atheist, who undresses and undresses others to show us what’s authentic.

One thought on “A Depressed Woody Allen?”