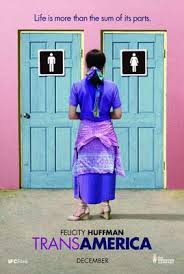 HAVANA TIMES — After seeing the Cuban films Fatima o el parque de la fraternidad (“Fatima or Parque de la Fraternidad”) and Vestido de novia (“Wedding Dress”) thanks to friends who receive Havana’s weekly package, I came across another film that seemed to me superior to these two.

I believe it is important that films dealing with different sexual orientations be made. The independent US film Transamerica (2005) should not be missed by those who support LGTB rights.

Directed by Duncan Tucker and starring Felicity Huffman and Kevin Zegers, the film received multiple awards. It tells the story of a transsexual about to undergo a vaginoplasty, whose plans change following the appearance of her son.

A road trip that will help the two get to know one another begins. Even though differences arise, the two grow close. The characters reveal more than they outwardly project. Their acts of kindness and their secrets make them human and unpredictable.

Love and friendship are two of the issues present in the film. Even though these have been used and reused in cinema, they feel fresh and legitimate. Communication gradually changes the main characters.

The film is not cheapened by caricaturized archetypes, such as the transsexual mother who rejects her son on first meeting him, only to pay for his plane ticket later in the hopes he will make it to her sex change operation in time.

The characters are misfits trying to survive. Bree dresses and wears makeup like a woman, exaggerates her femininity, but still does not manage to accept herself. Her son is a young, disoriented bisexual deprived of love. They enter into a rare symbiosis.

In this road movie, the majestic and hostile landscapes of the Midwest serve to define the characters and to dispense the difficulties that stand in their way.

The score reflects the mood of the characters. Near the end, with Silent Night playing in the background, we are shown the outcome of the metamorphosis: Bree is now a woman serving food at a Mexican restaurant who speaks Spanish fluently. She was able to achieve all her goals. In the last scene, the characters reunite and accept one another.

Dolly Parton’s Traveling Thru closes the film on an optimistic note, the integration of body and soul.

One thought on “A Film on Transgender Issues”