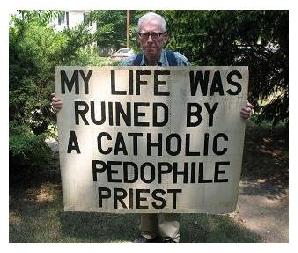 HAVANA TIMES — A close relative of mine who studied at a religious school in Cuba (Los Hermanos Maristas) was telling me there was a priest at the school who would pat him on the head and sometimes even kiss him on the cheek. This made me think about the issue of religion.

Every time I hear about a crime committed by the Catholic Church I grow furious and demystify my thinking about that religion and about all those who use it to manipulate innocent people at their convenience.

We know of the millions of women accused of witchcraft who were tortured and burnt at the stake in the course of history. At first, it was the Church that tried them. Later, it was civil courts.

The inquisition and the crusades were also directly brought about by the papacy and Catholic Church. In recent times, we’ve heard media reports of many acts of pedophilia that have been perpetrated by religious authorities since the 1940s. These incidents were brought to light at the beginning of the 1990s.

These acts were perpetrated in orphanages, seminars, hospitals, parishes and welfare institutions by a good many religious figures in the United States, Australia, Ireland, Germany and other countries. The most objectionable aspect of these incidents, however, is how they were neglected by successive popes, kept as secrets for years. On seeing the light after so many years, these secrets become acts of sacrilege against defenseless beings.

Martin Scorsese’s The Last Temptation of Christ, a film that was banned in many countries and repudiated by the Church (to the point that some movie theaters were burnt), now comes to mind. Here, in Cuba, the film was never even shown on television, allegedly because the copy was ruined.

I was able to watch the movie at a friend’s place and to see, first hand, the controversial “temptation” they didn’t want us to see. By that time, the Cuban government had already opened up to the papacy and the film had to be shelved. What is Christ’s temptation, compared to the incidents I’ve described above?

There are many films dealing with the inhumane aspects of the Catholic Church. One of them is The Name of the Rose, based on Humberto Ecco’s novel, in which the Church murders those who seek knowledge and spiritual and carnal sins are committed with impunity.

The Sisters of Magdalena, which deals with the lives of young women confined to a convent in the 1960s, is another example. The film focuses on the lives of young, single mothers who are isolated in the convent for daring to break the rules of a society raised Catholic.

British director Stephen Friar’s 2013 film Filomena, starring Judy Dench, is the story of an old woman in search of her son. In her youth, she was confined to an abbey for having “sinned” before marriage.

Many young women were locked up in such abbeys to become virtual slaves. These women were allowed to see their children only one hour every day. Children were taken from their mothers and subsequently sold to rich adoptive parents, almost always foreigners. These last two movies are based on true stories.

These are some of the repugnant acts committed by the Catholic Church, an institution that, in the name of God and on the basis of its blood-drenched power, believes itself entitled to meddle in the lives of others.

3 thoughts on “In the Name of God”