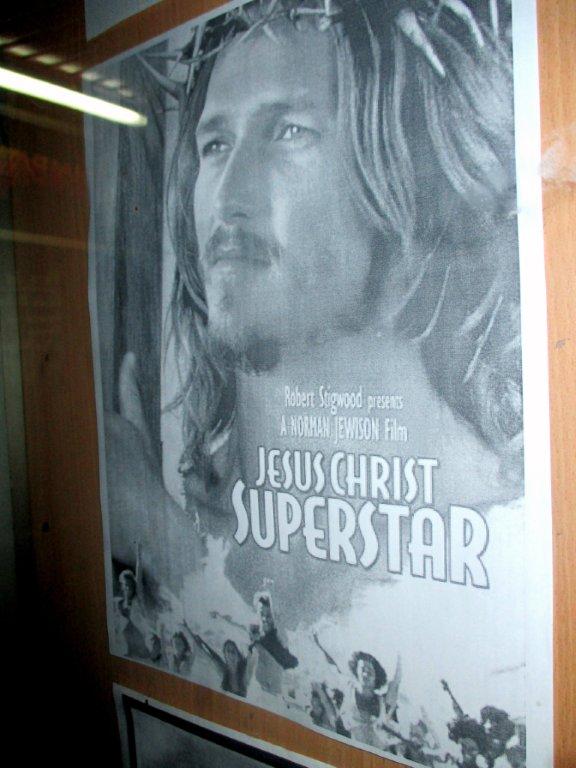 It’s curious these films were barely even publicized and shown at a screening room without air conditioning. It is also quite surprising the film wasn’t shown for so many years (only the television program De la gran escena aired clips from it). Was it banned in Cuba, or simply dismissed by programmers? They may have thought it was mocking religion, and it does quite the opposite.

Jesus Christ Superstar has powerful music, performances and choreographies. The scenarios, mixing the biblical with the modern world, is permeated by anachronisms that move the plot along. Its beautiful photography treats the senses, particularly the collages showing images reminiscent of pop art.

All of this is made unforgettable by a very human Christ, which is what made the film most attractive for me. It made me recall Martin Scorsese’s much maligned The Last Temptation of Christ, an adaption of novelist Nikos Kazantzakis’ book, which prompted acts of violence from many fanatics (who set French cinemas on fire). Here in Havana, they had announced its screening at a local theater, but it was cancelled at the last minute, allegedly because of equipment breakdown.

Scorsese’s controversial film centers on the question surrounding what path Christ is to follow: whether to sacrifice himself for others, or become a quiet, conventional father who leads a normal life and has an uneventful death with no consequences for the world.

The humanity of Christ is presented as a mistake or temptation which, in a moment of weakness, out of fear or suffering (a form of deception by the devil, represented by an angelical child in the film), makes him climb down the cross and choose not to sacrifice himself for others.

The dichotomy that transcends this drama and becomes philosophical at times proved controversial. If Christ was a man, why couldn’t he have asked himself those same questions? Weakness, egotism, the struggle between good and evil, aren’t these all part of our human universe?

Sometimes, we act on kind impulses. Other times, evil guides our actions, and the impulse to turn our backs on our responsibilities pulls the strings and seduces us. The impatient urge to free ourselves from a burden that weighs on us can be dangerous. True saintliness lies in sacrificing ourselves for the people we love, who constitute a heavy chain we cannot not and ought not break.

This is why I believe the true Jesus, Christ, or however we wish to refer to him, can live within us, and be present when we need him when we do things that set us apart from relatives, friends and even enemies. To be patient and to give others love is a gift, but learning to tolerate and respect others is perhaps the greatest challenge. If we are Christ or Jesus for a day, for an hour or even a second, we’re helping others and are giving something pure and unconditional to others.

The retrospective includes documentaries and live concerts staged by important rock bands, which is why I feel it’s odd the screenings were barely even promoted (they were only announced in the monthly supplement to the cinema program sold at theaters). I also don’t know whether they deliberately organized the screenings at a theater without air conditioning, which demands a fair sacrifice from fans of Queen, Alice Cooper or Metallica.