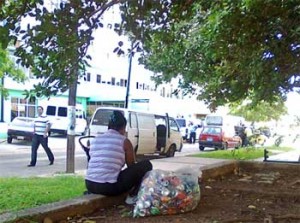 HAVANA TIMES — She walked in front of me and I immediately fixed my eyes on her. She walked determined, but exhausted, while on her back she carried a large sack, though at first I couldn’t tell what it was.

She was pushing her little baby — probably less than a year old — in a stroller that with immense difficulty she was navigating around the cracks in the sidewalk. About six feet behind her came another daughter, about eight, carrying a heavy stone.

The tortuous progress of this woman made me feel sorry for her, though I couldn’t do a thing. I was waiting impatiently for the P5 bus, sitting on a wall one block before the formal bus stop.

When this small procession passed, I again set my eyes on the horizon, looking to make out the giant green bus and trying to guess where it might actually stop to first let out the passengers and hurriedly let on new ones. Behind me, about a minute later, I began feeling a series of regular beats.

That same woman, who was no more than 35, had turned around at the corner and come back to the same wall where I was. She had sat down and begun working. She was another of those people who recycle pop and beer cans, those who I wrote about recently.

The baby was only a couple of feet from its mother, who — with the stone that the little girl had carried — was smashing each can flat. In the meantime, the girl was collecting cans from under the benches and out of garbage cans, playing her own game of “hidden treasure.”

Each can was going to end up in the large plastic bag that this worker was trying to fill. The sack would later be taken to a drop off point or sold to any person licensed to do that job.

It was about 2:00 pm, and I was looking at this woman who without the slightest discomposure indicated to her daughter where to look. I didn’t really know what to do. Should I have spoken to her? Could I have asked her any of the questions that were springing to my mind?

How was it possible that she hadn’t found a job that was less physically demanding than this one? Why did she have to bring her tiny baby with her? And why did she place the infant so close, risking a piece of rock or metal flying off and hitting the child? Why wasn’t the little girl in school at that hour? What could I do to help?

But I didn’t say a word. Most of my questions would have been offensive to her – understandably so. Some terrible human history must have been behind this young worker, but I would remain there never learning about it. I confined myself to snapping a photo.

I searched among those who walked by, looking for some sign — any sign — that they understood that it wasn’t right that the Cuban social security system was failing to protect this mother. Yet people passed by, unbothered, concentrating only on reaching the objectives in their minds.

Cynics will think that this situation isn’t so unprecedented. They’ll point to the millions of people in the world who are worse off. Others will show me the list of options here in Cuba: the Federation of Cuban Women, social assistance programs, writing letters to the Council of State, etc.

But none of that matters now. These days all I see is her, with her two young children, regularly and forcefully flattening beer cans from which her fellow countrymen drank (for about a dollar each) and then dropped on the ground. This is what she does. This is what I see. And it hurts.

One thought on “A Cuban Worker”