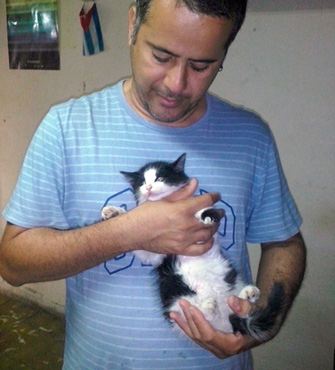 HAVANA TIMES – After long conversations with my partner, the two of us decided it would be marvelous to have a cat in the house. Ria, a beautiful, hyperactive, hairy black-and-white cat has been living with us for two weeks now.

Several things led to this decision. Kabir’s blogs in Havana Times, describing the animals that suffer abuse and abandonment at the hands of humans, were one of the factors.

The fact that nearly all of our neighbors own pets (mostly dogs) also influenced our decision. I have always loved animals, and seeing my neighbor’s pets every day filled me with something of a well-meaning envy.

Jimmy and I have always been dog-lovers, but we are both allergic to the mites that live in the fur of these adorable creatures. A cat struck us as a good alternative.

In addition, these animals hunt mice – a very useful habit that can keep this plague in check at home.

Ria is a dream…and sometimes a nightmare. She is very fun and playful, but, like all cats, she has mood swings and does not acquiesce to the wishes of her human companions.

She sleeps all day, while we work, and, at night, when we want to get some rest, she wants to play – and believe me, she is very insistent in her demands! 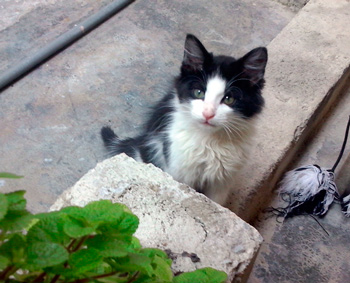 According to my calculations, she is about three months old. This means she is already fairly independent, but she also demands a lot of affection and she follows us everywhere we go in the house.

Having this defenseless creature that depends on our care around has been complicated for us, who are used to living on our own.

The issue of food hasn’t been a problem, for she eats very little. The problem is that she must be fed frequently. We are giving her five meals a day. We will be reducing the number of meals gradually in the next few months, until we reach two a day.

I want to thank all who got in touch with us to tell us about cats we could adopt. If we had the space and the time, we would adopt many more.

I also want to thank friends who are experienced in raising cats for their priceless advice. I am starting to see why they are such special beings. A cat can truly change your life.