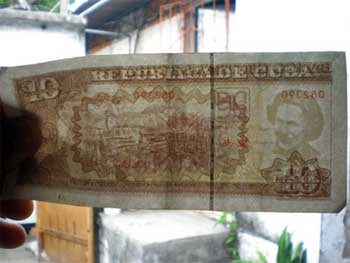 HAVANA TIMES, March 22 — “Sorry but this bill is counterfeit, my love, so I can’t take it.” That was what a clerk said to a woman a few days ago when she tried to buy a soft drink for her child at the private stand where I catch the bus to work every day.

Faced with the unpleasant situation, the poor woman didn’t know how to react. In her face was a mixture of embarrassment, in case anyone might have thought that she was the forger, and anger toward the taxi driver, who had just given her the bill as change.

I asked the clerk to explain to us how she had determined the bill was fake, which she agreed to do willingly. Two security elements were sufficient:

1. The image of Celia Sanchez (the heroine of the Cuban Revolution), printed as a watermark, should have showed in the blank area of the bill when it was held up to the light.

2. A “cord” or dark security thread running across the bill, should have also been seen when the note was held up to the light.

I searched a little more and I found that the same security thread should have had the words “Homeland Or Death” printed on it, and there should have also been micro-text reading “Central Bank of Cuba__Pesos” and fluorescent colored fibers visible to the naked eye.

According to this salesperson a surge of counterfeit bills had showed up throughout the city. They’re in 5 and 10 peso notes (worth from 25 to 50 cents USD). Years earlier a similar phenomenon had been experienced, but with 20 and 50 peso bills, according to the woman.

I don’t know if the National Bank of Cuba has designed some mechanism to effectively stimulate the reporting of this type of crime or if the victims can be compensated in some way at bank branches when they present the counterfeit notes.

With the usual poor attention provided by government institutions here, along with the well-known craftiness of my countrymen, one can expect that none of these things do or will exist.

Luckily, the woman was able to buy a soda for her child with another bill, and gradually her anger began to subside. She promised in front of everyone that the following day she was going to flag down that same taxi and would pay the driver with the same bill.