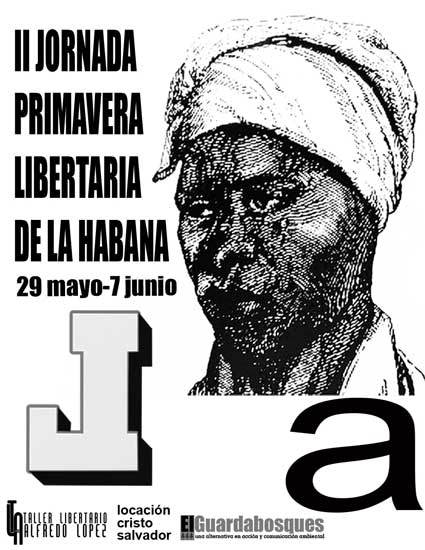 HAVANA TIMES – This past Friday and Saturday, Havana’s 2nd Libertarian Spring had days of intense work and debate. I am happy and encouraged by the feedback we got at all of the work sessions and by the depth of the opinions and knowledge shared by participants.

To date, a total of 29 people have attended the gatherings, a number far higher than that reported last year – and I am positive many other people will have attended our sessions when the event is closed on June 7.

The gathering has seen a fair number of participants from other countries, an indication that Cuban anarchists are accompanied by like-minded individuals and groups in other countries ready to show us their support.

People from Germany, Dominican Republic, Holland, Spain and France have joined us in Cuba, while others from Mexico, the United States and Argentina sent us materials we are distributing.

What’s proven more important for us, however, has been the participation of other Cuban anarchists who are not members of the Alfredo Lopez Libertarian Workshop, who make us feel we are not as isolated as we thought, and that anarchistic and anti-authoritarian ideas have coherently made their way into the island and reproduced through different channels.

To our surprise, strangers have approached us and expressed anti-capitalist and anti-totalitarian ideas, showing us they are capable of seeing that the egotistical and consumerist ideas that govern human society around the world have found fertile soil in Cuba, its system of government and many people who regrettably hope to find answers in these.

To date, the Libertarian Spring has helped us become acquainted with many experiences, both in Cuba and abroad, which point in new directions, focusing on collective work, art and co-existence, rejecting predatory and hegemonic logics and implementing horizontal and fraternal methods and practices.

To delve more deeply into our immediate reality, I hope the gathering planned for Friday, June 5, dealing with the newly-established relations between the States of Cuba and the United States, will be among the most widely attended, controversial and rich exchanges we’ve had so far, as the Alfredo Lopez Libertarian Workshop has a critical perspective on this phenomenon.

Hope to see you there.

One thought on “Cuba Anarchist Event Off to Good Start”