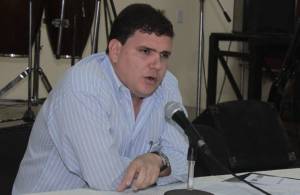 HAVANA TIMES — After learning about the shocking news that Julio Antonio Fernandez Estrada, one of Cuba’s most talented and passionate young left-wing academics, had been laid off, I became very restless.

People around me, who belong to alternative projects and have had moments of great activity in the area of thought, and who are also radically proactive like Observatorio Critico, Catedra Haydee Santamaria or Havana Times, have also suffered this kind of repercussion for years now.

Furthermore (or especially), other collectives and people labeled “dissidents” or “opponents” have not only suffered from these administrative measures, but have also been victim to direct violence on their person and their belongings.

The Cuban State continues marching forward relentlessly, perfecting their luxurious dinners for businesspeople and investors, correcting protocol and trademarks on the one hand, while on the other, they crush nonconformist youth from any ideological group.

They’ve kidnapped the Revolution to convert it into a sold out thing, this vile caricature that they sell in Latin America so that tourists go home with a Che hat, some bottles of rum, and the certainty that social justice will never figure among the government of these lands’ priorities again.

This is why (as well as other reasons) we anarquists already think twice before we call ourselves “leftist”. This Left that matches the Right in its level of corruption, opportunism, repression, however dressed up in balaclavas and red stars (and in Cuba, not even this much).

Now, if I go outside this common view of things for a moment, and I return to the faces of those individuals who actually DO the censoring, repression, corruption, indolence, what will I see?

Would I be able to identify them? The person who stamps their signature on the laying-off form, the person at the union who supports this decision, the work colleagues who look the other way as you leave the director’s office… Who are these people?

It’s so messed up to see the lack of solidarity that exists among journalists, all of whom are conscious about the censorship they experience while they watch the white-haired Party representative walk past, who has just come out of a meeting where State Security have drawn up a new policy that will never be presented to the National Assembly of the People’s Power.

What is fighting from the inside? Does it do anything? Yes: it helps maintain the status quo: an abusive State that blackmails its people with free healthcare and education of a poor quality.

Julito has said that he’ll never remain quiet ever again. This is what all of us who suffer the arbitrariness of the Labor Justice Bodies, District Attorney Offices and Popular? Courts, should do.

And those of us who have already been there and those who still haven’t gone through this; we should all support them too, showing solidarity even though it’s not our life on the line. Because this is about our dignity, which shouldn’t be limited to individual people, but should include everyone within our social group.

Whoever sits down to study anthropology or sociology from the safety of their studies, and then travels to LASA congresses or to give weakly critical (ridiculously critical) speeches at Universities in Paris, Spain, Puerto Rico; is just as an accomplice as those sad policemen on their red Suzuki motorbikes.

Yes, I understand that this is some kind of suicide, that there are families who depend on these jobs, and that these trips are always welcome. However, the other choice we have is to collaborate with evil, with lies, with a sham, with double standards, with injustice.

Today, I don’t have any original ideas or witty phrases. The truth should be enough.

It’s been made perfectly clear that the best service that the Cuban Government is providing global neoliberalism is to wipe out its critical youth, questioning artists and controversial journalists. It’s the perfect recipe for attempts to build socialism to be what the Right precisely says they are: sad totalitarian practices and the annihilation of difference.

I won’t remain quiet any longer.

2 thoughts on “Firings and a Lack of Solidarity among Cubans”