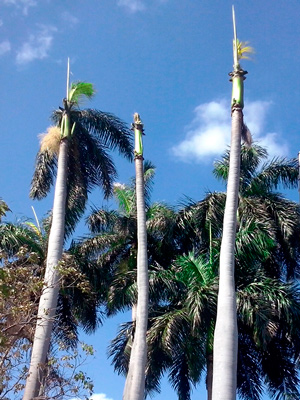 Those who set up the grandstand for the parade unscrupulously and drastically pruned two of the palm trees there and partially lopped a third one.

What’s most shameful about this is the reason behind this decision: the palm trees in question stood in the way of the imaginary line that goes from the grandstand and the gigantic billboard hung high on the facade of the theater.

Raul Castro and Nicolas Maduro would not have been able to see the entirety of the sign, with the phrase by Fidel Castro that proves highly suggestive today: “Revolution is awareness of one’s historical moment.” Nor would they have been able to see the faces of anarchist-turned-communist Carlos Baliño, sugar-cane worker leader Jesus Menendez and trade unionist Lazaro Peña.

Given the habitual orientation of the rally, these images were behind the people advancing down Paseo Blvd, and face only the obelisk at the Square, at the foot of which stand those who preside over the rally and their high-ranking guests.

Was it truly necessary to attack the trees that didn’t take anything away from the experience?

The authorities’ predatory ways are evident, as is the impunity with which the powerful make decisions in this country.

Article 4 of Cuba’s Forestry Law (Law 85) establishes that “the palm tree, Cuba’s national tree, is part of the nation’s heritage and its care and conservation is a high priority.” Further down, in Article 67, the Law points out that “any violations shall be sanctioned with fines to be determined on a case by case basis, in addition to all additional and applicable sanctions under the current legislation.”

Article 8 of Decree Law 200 (“Environmental Violations”) stipulates that “damaging or destroying a species with special significance for the country or under a protected status shall be sanctioned with a fine anywhere from 250 to 5,000 pesos.”

That said, the figure of the State environmental inspector isn’t well defined by this Decree Law. The result of this is that the population does not know who to turn to in order to report on a violation of this nature.

In short, we are dealing with a meaningless piece of paper.

In the years in which the Guardabosques (“Keepers of the forest”) project has uninterruptedly reported on environmental depredations of this nature, we have not heard of a single sanction against anyone who has damaged Havana’s urban trees (usually Cuba’s telecommunications company, ETECSA, the electric company and the Ministry of the Interior).

It is also sad to see that such damage ultimately yields no benefits. No matter how much the Cuban leadership was able to gaze upon these anti-capitalist worker leaders, they do not seem to be wavering in their intentions of rubbing elbows with the powerful (it doesn’t matter whether they are from France, the United States or Japan).