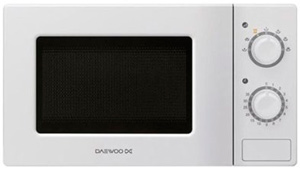 HAVANA TIMES — Microwave ovens can be of great help in the kitchen and have become nearly indispensable household appliances. They allow us to properly cook foods in a relatively short period of time and retain the nutritional properties of these foods. They also require a smaller number of containers and utensils.

In view of all these advantages, buying a microwave oven is a good investment.

First, I considered getting someone to buy it abroad, where the highest price isn’t above 50 dollars or euros (depending on where you purchase the product and the oven’s characteristics). Customs fees here and there, however, raise the price far too much.

In Cuba, the price of these ovens is far too high for the population’s average income. That said, it is worth the effort, so I saved up, peso after peso, until I’d put away the hundred and plus Cuban Convertible Pesos (CUC) I needed and set out to buy the blessed oven.

Overjoyed, I started heating up, defrosting and cooking meals, feeling that the house chores had become easier. But it was too good to be true. One fine day, the oven stopped heating up the food. Luckily, the 6-month warranty hadn’t expired and I immediately took the oven to the repair workshop assigned to this type of equipment. Since it is quite far from my house, I started spending quite a bit on transportation, and my dear microwave oven began to go up in price.

There, I was asked to fill out an extremely long form and told to pick up the oven the following week. I did just that.

With the oven back home, I was happy once again…until it stopped working three days later.

When I phoned the repair shop, I was told I had to take the oven back, that they couldn’t give me a voucher so that the store where I bought the unit could replace it (if they had the same unit in stock) or give me back my money, not until three attempts at repairing it had been made.

So, the oven went back into the box and to the shop. The following week, I went to pick it up and demanded that they test it front of me…and guess what? It wasn’t working. I left it for another week.

Yesterday, I went to pick up my oven again and, when I tested it, I realized it had a big dent on one side. When I demanded an explanation for the damage, the technician, bold as brass, said they had accidentally dented it while trying to remove the chassis. When I demanded compensation, they told me it wasn’t possible, that it was a kind of collateral damage. I had to take the damaged oven back home.

To my surprise, the oven isn’t working again. Tomorrow, I’ll take it to the shop one last time (as is established). I will have to head back to the store with a load of signed and stamped papers. We’ll see what the manager says, whether they replace the oven or reimburse me.

For the time being, I’ve returned to the hectic pace of the kitchen, where the spot for the microwave is empty, and I begin to experience a kind of macro-stress.