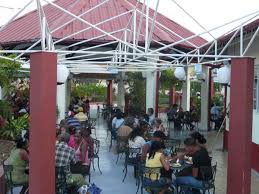 HAVANA TIMES — Here’s the story about the “technical norm,” the one I promised to share in my last post, the one I heard one of my compatriots tell while we were waiting outside the household appliances repair shop.

My fellow Cuban told us that, one day after work she went to the Santiago de Cuba Coppelia ice-cream parlor with a friend to have an ice-cream and cool off a bit. After standing in the usual line of people and waiting at the table for the habitually long period of time, the waitress finally came over.

“May I take your order?” the waitress asked.

“Bring us three Full Moons and three Big Rocks, all chocolate,” they said.

“I can’t do that. You have to mix flavors for those combinations. We have chocolate and banana, you have to order those two flavors,” she replied.

“But, miss, we don’t want banana. Besides, that’s a pretty explosive combination,” they retorted.

“That’s what’s established. If we don’t do that, then only one flavor is used and the other isn’t sold,” she answered.

“Please, you can’t decide what we want to eat,” they snapped back.

“What do you want me to do? That’s the “technical norm.” Decide what you want to do while I take another table’s order,” she said, heading towards the customers at the next table.

The young man telling us that absurd story had theatrical skills and narrated the story so well that it felt as though we were right in the middle of the action. We asked him, impatiently:

“We asked for the Complaints and Suggestions book. She went off and came back with the manager, who brought the book and said to us: ‘I’ve already spoken about this at several meetings, but, understand, that technical norm is an instruction that comes straight down from the Party leadership.’ ”

The great story-telling skills of this stranger, who had become somewhat familiar after two hours of waiting and sharing anecdotes, was met with a burst of laughter. I, on the other hand, got very upset hearing about that stupid norm.

The story ended as everyone expected. They got up and left without ordering any ice-cream, not without first leaving a lengthy comment in the complaints book and suggesting the Party ought not to decide what ice-cream flavor people should have – as well as demanding, in exercise of their rights as citizens, that the ridiculous “technical norm” be eliminated.

I don’t know, but I have the impression that, even in North Korea, people can choose what ice-cream flavor they want.

5 thoughts on “The Cuban Communist Party and Ice-Cream Flavors”