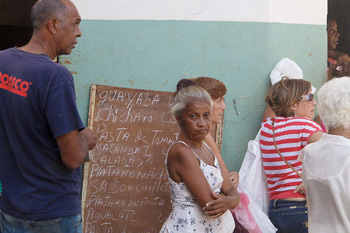 HAVANA TIMES — “What are they selling today?” asks the old woman as she hurriedly gets in line at the butcher’s. “The soy mincemeat and hot dogs,” someone replies.

The butcher, who’s overheard the conversation, says in a loud tone of voice: “You don’t get any hot dogs, only the mincemeat.”

The old woman winces – many of us don’t like that soy mincemeat.

I take a look at my ration booklet to see if I’m entitled to buy the so-called “dogs”, but no, I was wrong. When I look at the blackboard, I see that it says: “For children only”

The basic food products consumed by Cuban families are subsidized by the State and includes other rationed products such as five pounds of rice (plus two additional pounds, for a total of seven, per person, per month), beans (ten ounces), salt (a package every three months), coffee (eleven ounces), white sugar (three pounds), brown sugar (one pound), spaghetti (one package per person every two or three months), oil (half a pound), and five eggs per person).

The State established this mechanism for distributing food products in the early sixties to guarantee equitable access to most food products by Cuban families (with the exception of bread, yogurt and others that were already regulated).

In 1972, we relied on the aid of COMECON (the Council for Mutual Economic Assistance), made up of socialist bloc countries, which made a whole range of subsidized food products available to the population. These included: beef, chicken, processed cold meats, wheat flour, chocolate, condensed milk, Quaker oats, cookies, malted milk, preserves, juices and soft drinks. For New Year’s, we got a special allotment that included grapes, apples, pears, peaches, prunes, wine, nougat, peanuts, hazelnuts, beer, rum and other products.

“What good times those!”

They were indeed marvelous times, but they had a multifarious psychological effect on many Cubans, for whom the dichotomy “I am entitled to” / “I am not entitled to” defines the balance of a great many daily practices.

We have to try and eliminate this from people’s minds through a slow process (to prevent stress-related heart attacks), particularly in the old, who have even become accustomed to standing in line, for they are the ones who suffer the repercussions of our “reforms” the most.