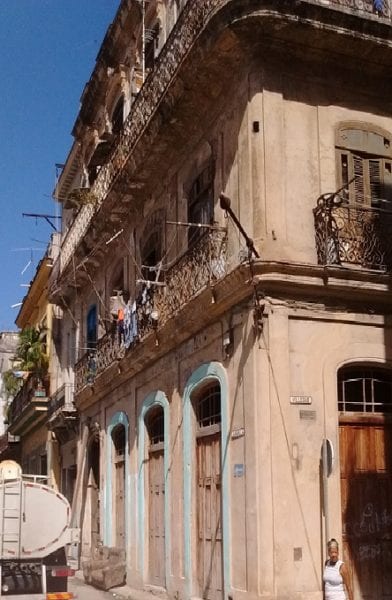 HAVANA TIMES – Havana was one of Spain’s conquests. The object of its greed and the battleground for the bloodiest of battles, where pirates made their mark, but also left their treasure.

It was the Conquistadores’ mistaken wish to bring Black people from Africa to convert them into slaves; into a labor force that could resist the arduous work and hot and humid tropical climate.

The French, Chinese, Arabs, Italians and some others also reached the city, leaving their cultural marks in this city of palaces, castles, mansions, villas and a wall, which they was knocked down.

The harmonious diversity of architectural elements and styles could be breathed in this city’s streets. Squares, doorways, inner courtyards, large windows, columns, banisters, privacy fences and balconies witnesses to the most impassioned serenades.

With so much beauty still hidden down its streets and, in its buildings,, the city’s soul is throbbing with pain. It is suffering and is demanding to be reconquered by cleaning its walls, its streets and even the souls of its people.

Havana, patrimony which endures in time because of so much love, is crying out to us to caress it so that its gala dress shines again, which has been cut and its beauty forgotten.

I have the feeling that many people are ungrateful, and this ingratitude sometimes reaches our noses, our eyes, it enters through our pores and our ears in the form of pollution.

The government’s intentions to make this city beautiful are good, as are those of institutions such as UNESCO, but it needs a grounded social policy that is visible, aware and makes people respect its heritage, so that this city of Havana which we all supposedly love, can hold onto its charming ways.

It will soon be 500 years old and it isn’t ready for the celebration, a lot needs to be restored, cleaned and, like a teenager of olden times, it is depressed to see that its dress still isn’t ready.

Even so, Havana continues to give us a lot of love, but it is unrequited.

One thought on “Havana: An Unrequited Love Story”