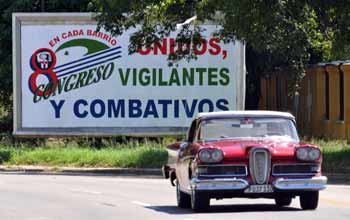 HAVANA TIMES — “We’ll be holding a meeting to nominate our candidates next Wednesday, at the market corner,” the chair of the Committee for the Defense of the Revolution (CDR) tells me as she opens the gate of her house. “Can I count on you to go?” she asks.

I looked her straight in the eye, thinking whether to answer her or not. I finally decided to do so, saying:

“I’ve been participating at these meetings for a very long time. We always discuss the same things and, even though this one has to do with something else, we never arrive at any solutions. There are several problems in the neighborhood. The most critical is the garbage problem – we have garbage that piles up and it takes up to a month to collect it. The place has become a breeding ground for infections and a perfect habitat for flies and cockroaches. They come out of the sewer and head for people’s houses and the cafeteria on the corner, which has plenty of customers. That corner is disgusting, to tell the truth.”

She looks at me, lowering her head as though she were taking in my words. Perhaps she’s embarrassed by what I’m saying or secretly thinks I’m right, because she lives in the same neighborhood.

“I’m certainly tired of all this,” I go on. “There were never as many flies in my house as there are since Nelsy, the CDR representative, decided to put all of the dumpsites in one street corner. We can’t even sit out on the porch because of the stench and the flies. It’s not only my house, it’s the entire neighborhood,” I conclude.

“Neighborhood residents are also responsible for this problem, because they throw the garbage outside the bin,” she says to me.

“Just one moment,” I interject. “We have three garbage bins for 6 city blocks, and they collect the garbage once a month! I don’t think we’ll be solving this old, major problem at the meeting. I don’t think I’ll be able to attend, you know the situation I have at home and I can’t walk away from it.”

“You’re right, kid. We’ll see each other later,” the CDR chair replies and walks away.