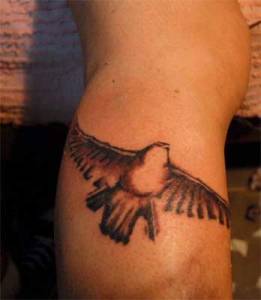 HAVANA TIMES, April 16 — My neighbor’s daughter, Rachel, has a tattoo near her ankle. Frankly, I had never noticed it before. I guess because my eyes always focused more on the silhouette of her body. But there on that spot, the tattoo was running the risk of being eclipsed by so much islander beauty exuding from her skin in full bloom.

On arriving at the farmers market the other day, she called out to find out who was the last person in line. I looked over at her, and this time I could note the pattern in detail. There stood a work of art, very low to the ground. My gaze was so insistent that when she noticed it, she asked if I thought it was pretty. “Sure, it looks good on you,” I said.

A group of various-aged women who were also in line picked up on the pleasant conversation. Speaking among themselves, they established a dialogue with rivaling opinions: some for and others against tattoos, as both Rachael and I listened.

“If I were young and had a body like that,” commented one of the octogenarians, “I’d get I don’t know how many tattoos. They used to not be so colorful or full of originality. These days they’re gorgeous.”

To please that lady, whose passionate gestures mocked the passing of her years, Rachel instantly raised her blouse ever so slightly to show the old woman another tattoo that she had had placed beneath her navel.

Still looking, I grasped delightfully on seeing it.

“Do you have any more?” I asked with a grin…

For a long time tattoos were looked down upon by our society. When someone wore a tattoo, it was the symbol of an ex-con, and for decades these were adopted by only a small minority of our population.

Today’s tattoos — etched on different parts of the body, even in the most unimaginable places — are looked at quite differently.

Although some people still don’t accept them, the truth is that there are now masses of people who exhibit these true works of art, no matter their age or the social class they belong to.

One thought on “Tattoos in Cuba”