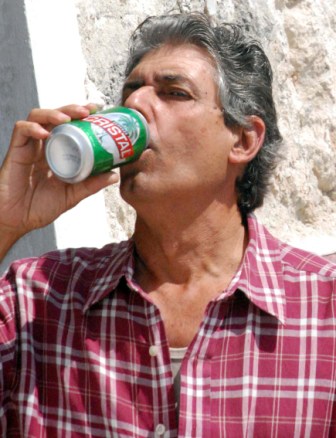 I had an enormous craving for a beer. It was Friday, so instead of going directly home when leaving work, I found my way to a more affordable restaurant that generally charges in domestic currency. They make some awesome drinks there.

Since I didn’t have any hard currency CUCs to buy a beer, I asked the bartender to fix me a piña colada (sold in regular pesos).

With the upmost reluctance, the man trudged away to begin preparing the drink. Despite that, I was euphoric watching the new music video by Kamila, a group that’s widely popular right now among Cuban young people.

“The other day I heard a schoolgirl say that the guy in the hat has more presence than the leader of the group,” I said, trying to talk with that same bartender. “Sure the camera focuses more on the leader, who’s always trying to flaunt the sensuality in his superb voice,” I added.

I didn’t hear the voice of this guy with whom I was trying to talk, he only nodded. Maybe this was so he wouldn’t seem too rude, because it was obvious that he wasn’t interested in my topic of conversation.

When he finally finished, I had the impression that the piña colada was nothing more than a soda.

However the bartender had stepped away from the bar, so I tried to hearten myself with the idea that though this cocktail was light, it still had a bite. I wanted to go home cheerful so I put all my hopes in that thought. Yet when drinking the last drops from the corner of the glass, I remembered a phrase often used in popular jargon: “If I ever met you, I don’t remember.”

With a little dejection and more dissatisfaction, I gestured to the barman to come with the bill. He surprised me by saying, point blankly: “That’ll be fifteen pesos,” to which I managed to reply, “Unquestionably the most expensive pineapple juice I’ve ever drunk.”

One thought on “The Most Expensive in the World”