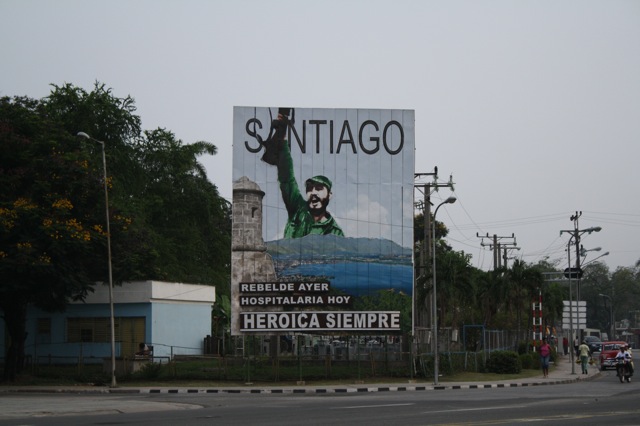 Two nights ago, I boarded a bus in Havana and traveled across the island to Santiago, the second largest city in Cuba.  Although I usually don’t sleep well on overnight buses, I decided to take the express bus that left at 6:15 p.m. from Havana and was expected to arrive in Santiago at 6:15 the following morning.  The twelve-hour trip revealed a lot about the way things are in this country.

I’ve done a lot of traveling through other countries in Latin America, and I have to say that I’ve never felt safer traveling at night as I did here in Cuba. I traveled through Mexico and Central America from 2002 to 2004, and although I was always advised to not travel at night, circumstances inevitably caused me to do it anyway.  Each time I did, I worried – with reason – that I might not make it to my destination safely.

Once, while waiting to leave on an overnight bus in Mexico City, two bus station attendants boarded to videotape the faces of all the passengers on the bus.  I found out that this was done in case any of the passengers robbed the bus or took it hostage.

Another time, in Guatemala, I met a fellow traveler who had arrived from El Salvador on the same bus that I was going to board the following day in the opposite direction. His bus had been hijacked and robbed by a gang of men with machine guns. (I quickly changed my itinerary.)

The following year in Managua, an older woman who owned the Bed and Breakfast where I stopped to eat warned me not to take the overnight bus to Bluefields. “You’re going to die if you take that bus,” she told me. “Gangs put rocks under the tires in the middle of the night and rob everyone. They’ll kill you!” I ended up taking the bus anyway and I didn’t die, but each time it stopped abruptly on that dark road in the middle of the night, I held my breath and hoped I would live to see the next day. Needless to say, I didn’t experience any of this anxiety or fear in Cuba.

The only startling experience en route to Santiago was when our bus collided with a heap of plastic crates that had fallen off of the tractor trailer in front of us.  A passenger began to yell as the bus swerved around the colorful crates that littered the road.  We pulled up beside the truck on the two-lane highway as a car came towards us in the distance.  “Your crates fell!” shouted our bus driver to the man behind the wheel in the truck.  He nodded affirmatively to say thanks.  We then passed him, got back into the correct lane and continued on our journey.

One thing is certain – I noticed that Cuban authorities are extremely organized.  Ten minutes after we left Camaguey – the only brief stop we made along the way – the policemen at the first checkpoint notified the bus driver that several people had been left behind.  Authorities at the bus station in Camaguey must have radioed them.  We turned around and drove back to the station to pick up the young couple and small child. They hurried onto the bus, and once again, we proceeded on our way.

Salsa music blasted from the speakers on the bus as an attendant handed out ham sandwiches and lemon-lime soda.  We drove through the lush, green countryside as a fierce thunderstorm lit up the sky in the distance. I didn’t sleep much, but it wasn’t because I didn’t feel safe.  The plantain and coconut trees that lined the ever-changing horizon were too beautiful to ignore, the adventure that awaited me in Santiago too exciting. And I should mention one more thing – if Havana was a sizzling–hot oven, I must have jumped into a fire when I arrived to Santiago.

Kelly Knaub: My interest in journalism comes from a desire to write, tell stories and appease my endless curiosity about the world. I spent five years teaching English to immigrants and refugees in New York City before embarking on my Masters degree in journalism at New York University last fall. I previously lived in Mexico for two years and traveled all over Central America. My experience as a human rights observer in a Zapatista village in Chiapas inspired me to become a journalist. By writing for Havana Times, I hope to contribute to a broader perspective of Cuba.

3 thoughts on “A Safe Journey”