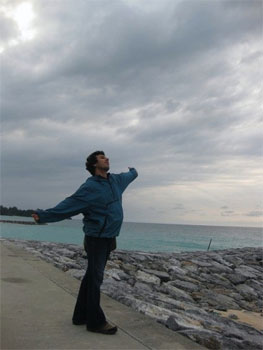 HAVANA TIMES — To describe it as a dream would be to miss the point. Dreams always look at one’s own possibilities, though they’re over in a few hours. That moment was too alien, like a strange and confident animal that let’s you pet it and then runs away.

Without exaggerating too much, the toilet seat looked more like a pilot’s cockpit than the site that would receive the last product of my digestion. As I sat down, the seat’s warming apparatus was immediately activated. The arm was equipped with buttons with Japanese letters on them, fortunately with icons that represented the functions for which they were intended.

Once I finished, I pressed the buttons in order. Suddenly a pressurized jet of water began its cleaning operation. Frightened at first, I then smiled, cheerful as a child.

Then suddenly, like a vision right in front of me, I saw my mother tearing up a newspaper into strips for use as toilet paper. It all made me a little sad.

But it wasn’t like that here. Beside me were two brand-new soft rolls of toilet paper. I laugh at these things now, but then it was almost a proclamation of freedom. I think these little things, which are so quickly forgotten, give more sonority to that so often used word than we suspect.

Later, I realized that for many hours those familiar odors had disappeared. In their place, an amalgam of sober, impersonal smells filled my olfactory space. The musty smell of sweat and urine in the streets, of hundreds of bodies and objects rubbing against each other, wearing themselves down, rotting, all disappeared in a flash.

Now there are only the unfamiliar smells of what I un-assuredly identify with what I think should be those of cleanliness and comfort. Even if I can breathe it in deeply I can’t name the smell. I’m unfamiliar with the world of hygiene products or any other type.

A ton of objects with various shapes and sizes are paraded in front of me. I’ve touched them all, smelled them all, as if through this I were trying to reach a certain essence that would advance my communion with the world.

After a while, a certain freshness was born, a certain peacefulness that almost managed to get me in a mood. I thought that this world of scents and shapes was designed to dilute anxiety, to make one forget their yearning for identification, to help one put to one side their dream of raising their head up from out of the crowd.

I decided not to think too much about that latter idea. It was too much for me. I got carried away. However, although I’m grateful for these new sensations, my body — maladjusted and capricious — rebelled. Then all at once, my allergies started acting up, almost out of control. 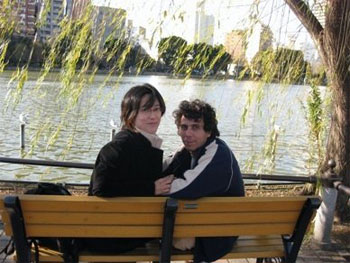 “No,” I said to myself, itching and sneezing weren’t going to spoil my day. But that was nothing compared to the leap I had made. Nothing in my 35 years of existence was like what I experienced after just a few hours of flight.

Now I would find something to relieve my allergies. I still had a lot to learn.

Standing in the window, naked, I watched the sun set in a new point, watching the aircraft plow along foreign routes. The landscape seemed to have its own body, indifferent to people. In a few hours I would see the woman I loved. The two of us together, we would fling ourselves into any of Alice’s holes that awaited me.

I didn’t hear the cellphone ringing beside the bed. My ear wasn’t capable of recognizing the sound. I had only used that phone for a few days. At that time, which now seems so long ago, a friend lent me his phone to talk — nervously — with my girlfriend. I was in Cuba, she was in Japan. Now the two of us would rejoin each other in the same land.

I still didn’t know a lot about cellphones or very many other gadgets, but I did know enough about knocking on the door by anxious knuckles. In this way, without waking myself out of my dream, I somehow stood up and opened the door.

At that moment, standing in front of her, it didn’t matter about adjusting to the culture, succeeding or being free. All this happened suddenly and I was happy. No doubt I was where I was supposed to be and with the person I needed to be with.